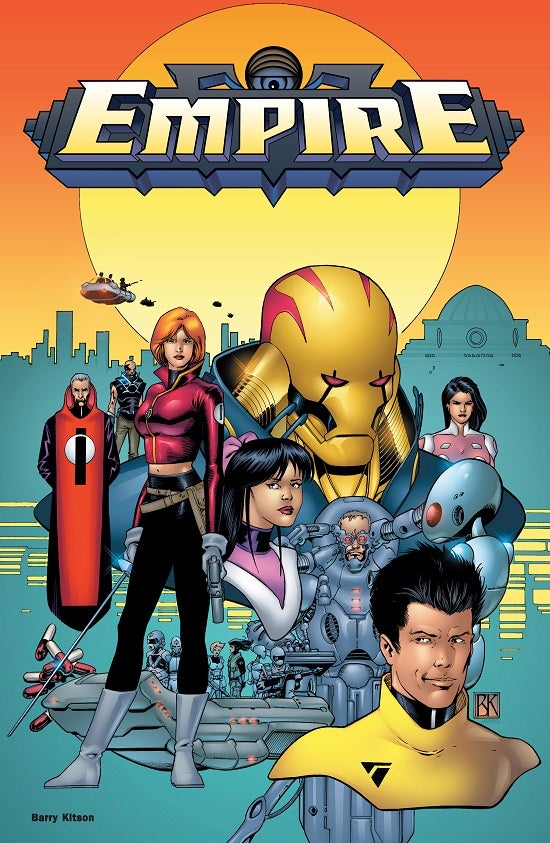 Thrillbent, the Mark Waid-run showcase for creator-owned digital comics, has announced that Empire Volume Two, the long-awaited sequel to Waid and Barry Kitson's best-selling Empire, will launch on May 28. The book will be serialized exclusively on Thrillbent beginning that day and continuing twice-monthly thereafter. Empire Volume Two marks the first major release for Thrillbent on the company's recently-launched integrated iPad App, which streamlines the buying and reading experience while allowing users to sync their online accounts, access their comics through mobile devices and keep track of their purchases and reading. Empire Volume 2, along with all the other content on Thrillbent, is available with the $3.99 monthly subscription (also available through the website). As an added bonus, subscribers will also be able to download the original Empire, a perk only available to Thrillbent subscribers as the original (from Gorilla Comics and later DC Comics) is long out of print. Empire Volume Two brings back the original creative duo of Waid and his co-creator Barry Kitson. Chris Sotomayor handles the coloring and Troy Peteri the lettering. The series continues the saga of Golgoth, a remorseless villain whose long-game plan of world domination finally won him the planet Earth and everything on it. While Golgoth's reign in the first book was filled with challenges and conflicts - including a drug-induced plot again him by his own ministers, his innocent daughter's troublesome aspirations, and the threat of extraterrestrial forces - Volume 2 opens with his grip on the world as strong as ever. But where is his strength coming from? The sole loyalist who kept him anchored to humanity is one year gone, and on the anniversary of Golgoth's loss, several seemingly coordinated new threats are surfacing around the globe. Each presents its own unique threat to the throne, and if Golgoth wants to maintain the crown, he will have to divide his forces--and his attentions--in dangerous new ways.