All last weekend (and for quite a while longer than that, actually), Mark Waid was making headlines at WonderCon by 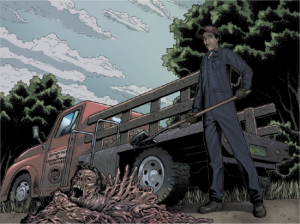 talking about the future of comics and how it's going to be digital. He recently told his Twitter followers that there needed to be a major shift in the way people perceive and read digital comics, before being announced as the writer on Infinite Comics, Marvel's first "augmented reality" digital title with artist Stuart Immonen. Waid, who turns 50 today, has not generally been the kind of guy most fans associate with the future of the medium. He's a skilled writer, there's never been a doubt, but his deep love of the Silver Age and encyclopedic knowledge of comics history has often led fans to see him as a part of the recent movement at DC to revert everything back to its pre-Crisis on Infinite Earths status quo. He's been inching away from that impression in recent years, not just with his comments on digital but also by virtue of his "insane Superman" book, Irredeemable, for Boom! Studios, where he used to be the editor-in-chief. This weekend, though, he took a dramatic step toward tomorrow, announcing at WonderCon that he would sell his print comics collection, decades in the making, in order to finance a line of digital-first (or possibly digital-exclusive) comics. He started with Luther, a kind of one-shot, post-zombie-apocalypse Of Mice and Men with artist Jeremy Rock which apparently is an idea Waid had years ago and had just never put to paper. Well, technically he still hasn't. The PDF has been live since March 16 for free download at his website, but it's getting a big push today on Twitter, with the "Mark Waid wants you to have a present for his birthday" tagline. The site also promises that fans who return on April 2 can see what Waid has in mind next, and even participate in it themselves. The story itself is simple, poignant and entertaining but feels a little thin--although that's not necessarily a bad thing. Weighing in at just over 30 pages, a lot of that space is taken up by repeating images over again in order to get the feel Waid was going for. The free download allows you to page through a PDF, and allows for a comic book page to evolve in front of the reader's eyes. It's clever, from a storytelling point of view, in that it allows Waid and Rock to use the page in the most visually-appealing way they can without the final panel ever blowing a plot point before they're ready. For example, if you were to turn the page and find a zombie about to bite someone, the panels of the attack--and anything following it--would be missing at first, revealed only when the reader flips past the previous page to reveal the plot point in question. It's a strategy that works very well for Luther, which is a quiet, somber story that doesn't necessarily have the same high anxiety as most zombie tales but which nevertheless benefits from maintaining the surprise of a few plot points and panels that readers get to see at exactly the best time under Waid's new format. As an ongoing story, Luther would likely not generate a substantial audience at today's prices--but part of the idea behind Waid's strategy--and part of the reason one could justify a thirty-page comic that's really probably about 15 pages of content--is that if this book weren't free it would be subject to Waid's philosophy that single-issue digital comics should be sold at a new-reader-friendly 99-cent price point. At that price, this free comic would be a steal.