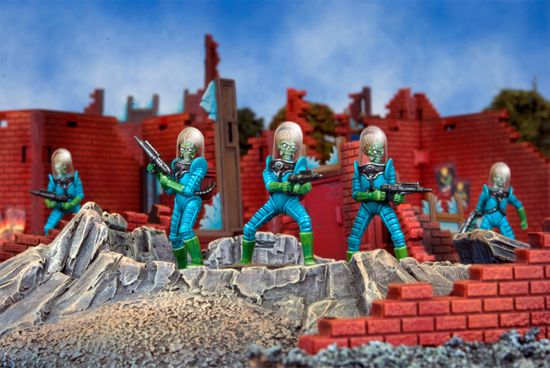 Mantic Games, who were behind the Dreadball and Deadzone kickstarter-funded miniatures games, funded their newest Mars Attacks: The Miniatures Game in just 13 minutes on Kickstarter. Throughout the first day of the campaign, Mantic was able to reach eight stretch goals, adding new content such as additional Martian figures, new heroes and even a Martian flying saucer.

The first stretch goal, reached at the 75K level, was an exclusive set of Mars Attacks trading cards. These 4 cards, illustrated by series artist Rafael Gallur, fit in to both the Mantic game story as well as the upcoming Topps series, Mars Attacks: Invasion. Kickstarter pledge levels "The Will of Man" ($100) and "The Invaders Arrive" ($150) include the base game as well as Mantic 'credit' that can be used towards high value add-ons, including the exclusive cards. If fans simply want to collect this card set, Mantic is also offering a consumer friendly $15 pledge level especially for collectors.

Mars Attacks: The Miniatures Game is a tabletop wargame that pits Earth's soldier's and civilians against Topps' hideous Martian soldiers.  The core game currently includes 13 Martian soldiers plus Martian General Tor, 9 Earth soldiers, 5 civilian rebels, game mat, scenery, and everything else needed to play the game. If further stretch goals are released, the base set may expand to include additional figures and elements.

Mars Attacks: The Miniatures Game Funded In 13 Minutes On Kickstarter

My Hero Academia Fans Melt Over One Actor's Ultra-Supportive Parents