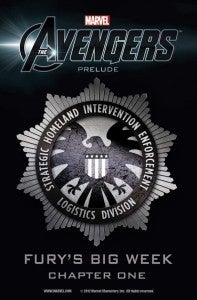 Marvel Comics announced today that Marvel's The Avengers Prelude: Fury's Big Week, an eight-issue comic book series that closes the gap between previous Marvel films and this May's The Avengers feature, beginning on Sunday  with a free first issue and then running weekly for 99 cents on Marvel's digital comics app. The first issue will be available free starting on Sunday, meant to coincide with Marvel's new Avengers trailer running during the Super Bowl. Subsequent chapters will run on Tuesdays beginning February 14. "We've worked hand-in-hand with Marvel Studios to create an exciting story set in the Marvel Cinematic Universe that sets the stage perfectly for the most anticipated film of the summer," said Axel Alonso, Marvel Editor in Chief, in a press release. "Now, for the first time. you'll find out just what happened to some of Earth's Mightiest Heroes on the road to Marvel's The Avengers." Written by Eric Pearson from a story by Pearson and Chris Yost, the eight-issue miniseries will be drawn by Luke Ross and promises to deliver background information about Fury and his Avengers Initiative in the Marvel movie universe.