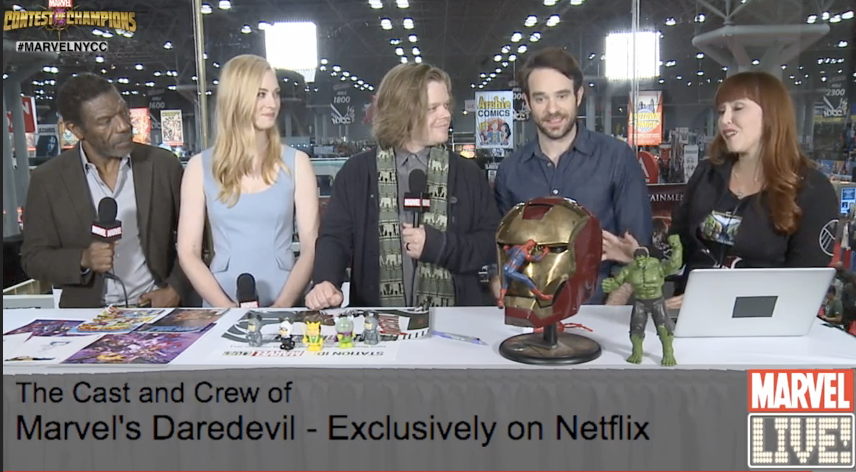 The newly-revealed cast of Daredevil opened up about bringing the Man Without Fear's life to screen during a Marvel LIVE! chat at New York Comic Con.

While the cast remained mum on specific story details, they did divulge on the experience of creating Daredevil and inhabiting the hero's world.

Vincent D'Onofrio, who plays the Kingpin, had the most to say about his character, citing how easy the superb writing has made it for him to bring Wilson Fisk to life. He specifically referenced a particular scene that is "very emotionally violent and physically violent." He also mentioned that some of the stunts he is doing for the character are "particularly awesome."

Many of the cast members shared their passion for filming in New York City, which Daredevil's Charlie Cox specifically called a "character" in its own right. So, it certainly seems that the series will embrace Daredevil's  distinctive locale and bring Hell's Kitchen's identity to life.

The entire cast also praised the work of the stunt crew, the writers, and their fellow actors. Bob Gunton, who plays The Owl, revealed that some of the performances he's seen on set are "soul-bearing," making for a show that will be just as rife with compelling story as it will be with comic book action.

You can check out both interviews here for more on cast's thoughts, and the process of bringing a comic book to television.