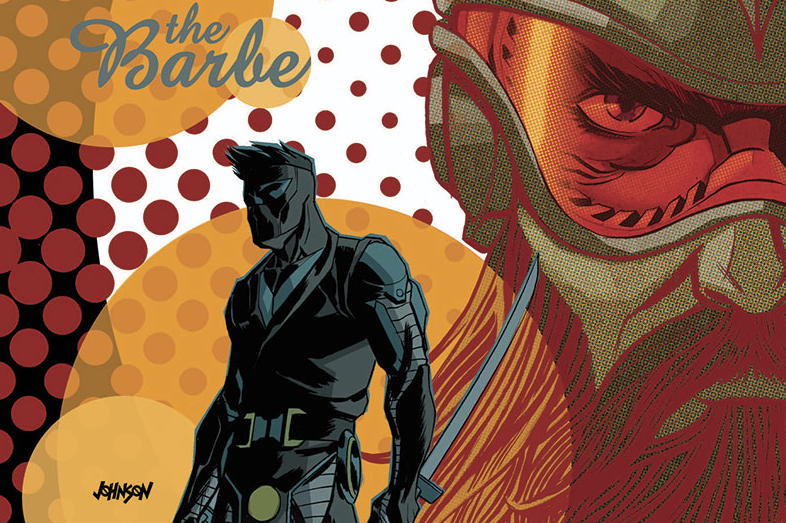 This weekend at C2E2, Valiant Entertainment is announcing the second story arc of the new series Ninjak. Writer Matt Kindt will be joined by artists Raul Allen, Juan Jose Ryp, Stephen Segovia, and Clay Mann to tell the story of Ninjak as he confronts the mysterious and deadly members of the Shadow Seven in "The Shadow Wars".

Valiant has provided ComicBook.Com with an exclusive interview with Matt Kindt, covers for Ninjak #6 by Mico Suayan, Marko Djurdjevic, and Dave Johnson, and Kindt's own designs for some of the villains. The official Valiant announcement, solicitations, and preview art follow the interview below.

Chase Magnett: Let's talk about the structure of "The Shadow Wars," the next arc of Ninjak. Your first story in Ninjak, and a lot of your other work, is driven by 4-6 issue story arcs. "The Shadow Wars" will conclude each issue with a showdown between Ninjak and a member of the Shadow Seven. How are you approaching this change of pace? Will the issues be designed so that they can be read both separately and together?

Matt Kindt: Ideally, I try to keep all of my monthly books structured in a way that makes each issue a satisfying single-serving read. Even if the story continues or there's a cliffhanger type of ending. Each issue kind of has a point to it – or a narrative experiment/technique that will be unique to that issue. Issue #3 of Ninjak, for instance, continues the six-issue arc, but that particular issue takes place in "real time" – so the actual time it takes you to look at and process the panels of art is how much time it takes in the real time of the characters. Reading the captions and dialogue will slow you down of course, but the actual "real time" of the issue takes place in about five minutes. I thought it would be interesting to try, and be a fun way to really break down the action and show it in detail - to illustrate how quickly Ninjak not only acts, but how quickly he thinks.

Magnett: Valiant is pitching "The Shadow Wars" as a jumping on point for the series. What about this story and the character of Ninjak do you find to be the most accessible to new comics and Valiant readers? How are you trying to draw out those strengths in this story?

Kindt: The series is usually from his POV (except for issue #4), so every issue is pretty accessible. There are definitely things that I'm seeding into early issues that pay off later. So honestly, the most satisfying way to read it is from beginning to end. But again, every issue is something I'm trying to write as a unique storytelling experience, so each issue will have a slightly different flavor. It's more like a collage of action and story that will eventually paint a big picture of this larger-than-life character.

Magnett: You've mentioned that as an artist and writer yourself, you like to cater to your artistic collaborator's strengths. Have you had a chance to figure out how you'd like your script to play to the different artist's strengths in "The Shadow Wars"?

Kindt: It's always a conversation, especially when working with someone I haven't written for before. I usually build a few different options into scripts – suggestions for layouts or ways that the action and story can be shown - and then have a little back and forth to see what they're comfortable with. I usually have a conversation with an artist before I start writing and just get a feel for what they like to draw and what kinds of things they haven't gotten a chance to draw. It's a good way to get some new visual ideas I wouldn't have thought of otherwise, and it's always good to have an artist drawing something they're excited to draw. It's how I write for myself as well. Oftentimes a story is driven by an idea for a strong visual...and that becomes the kernel that an idea grows around.

Magnett: And as you imagine "The Shadow Wars," what do you think makes these stories most compelling as comics? What special elements about Ninjak and his enemies really come to life here?

Kindt: I tried to come up with an interesting cast of characters – villains for the most part – but also characters that share similar training to that which Ninjak received. So, to me, what makes them all interesting is that they come from the same place, but their backgrounds, upbringings, and personalities have split them into very different directions and occupations. It's kind of like the idea of the "Seven Up!" series – the documentary that followed kids from age 7 years old and checks back in on them every 7 years. They're in their 50s now –  they all went to the same school, but their lives are completely different – separated by class and money and experience. This is kind of like that – but with ninjas!

Magnett: One of the things that I think you do exceedingly well is design unique visual elements, powers, and cues within your characters. How was the experience of designing at least four of the Shadow Seven from scratch?

Kindt: It's always fun  – being an artist helps too – trying to come up with a character that will be fun to draw over and over again, but to also visually represents the personality of the character. That's the key. I used to teach character design to college kids and I honestly learned more about character design by having to teach it than I ever did by studying and reading on my own. There's a lot of thought that goes into it, and if you spend a semester teaching or working on it, it really opens up your eyes to the amount of thought and work that you need to come up with something that's going to not only work but hopefully be iconic.

Inspiration comes from a lot of funny places. There's one character I came up with Fakir, a master-thief and ninja who's got these crazy skinny extra arms and tiny hands, which just look super creepy. That was inspired by these little rubbery hands that my daughter was obsessed with for a while. You swing them around and they stick to things and they're just super gross and funny. But then you put those on a suave mustached master thief and they become something cool and creepy.

Magnett: Just looking at Roku and the fascinating ways that her hair plays into both her character and action, it's exciting to imagine what secrets and abilities the remaining five members might hold. Can we expect this same level of visual panache from all of Ninjak's new enemies?

Kindt: Yeah, they are all definitely crazy and different. It's tough in the modern age of comics to come up with something new visually and new power sets and abilities. So I usually just end up starting with character first. What kind of person is this? And then, what kind of ability would they manifest or be interested in? We've got a crazy billionaire recluse in a foil suit (and a lot of secrets), a master thief that looks like Errol Flynn, and a blood-sucking punk rocker in a tutu. We're definitely having fun with this.

Magnett: Thinking about "The Shadow Wars", what do you find most exciting about the future of Ninjak?

Kindt: I think from a narrative standpoint, Valiant is letting me do something unprecedented with the storytelling – piecing out Ninjak's back story and origin and life over a long period of time (12 issues or more) – which we don't get to do as much anymore in mainstream comics. Valiant has given me a long leash to not just tell an interesting story, but tell it in an interesting way that hasn't really been done before. The story is split over three timelines with back-up stories detailing Ninjak's early years, then his childhood, and then the present day which will all eventually tie together. That sort of long-form structure and the ability to do some fun things with the inside covers, like the gadget drawings, all help make this a really fun and quirky book, not just in the Valiant line, but on the entire comic shop shelf. There's nothing like it.

Magnett: And stepping back, you've been working with Valiant quite a bit over the last several years. Last summer you seemed very excited about all of your upcoming projects with the publisher, and that excitement doesn't seem to be waning. What is it about the publisher and these characters that makes you want to keep coming back?

Kindt: They let the creators create. They've got a great stable of characters for us to play with, but the artistic and creative vision comes from the writers and artists. At the end of the day, it's the creator's name on the cover. Getting to use your own voice and vision has made it not just a fun place to work, but a place where when the final product hits the shelves, you can be proud that your name is on it. I'm just as proud of it as I am of my creator-owned work.

This summer, Matt Kindt is pitting MI-6's most elite intelligence operative against four brand new foes…and some of the greatest artists in comics today are about to join the battle!

Ninjak went to Tokyo to destroy the shadowy Weaponeer arms cartel from the inside out, beginning with its secret council of shinobi masters…the Shadow Seven. Now, the world's top super-spy is cutting his way through the four death-defying members – The Barbe, Fitzy, Fakir, and Sanguine – that stand between him and the one secret that still eludes him… Who really wields the power behind the world's most powerful terrorist network? Who is the secret seventh member of the Shadow Seven? And what do they want with Colin King?

"I tried to come up with an interesting cast of characters – villains for the most part – but also characters that share similar training to that Ninjak received… We've got a crazy billionaire recluse in a foil suit (and a lot of secrets), a master thief that looks like Errol Flynn, and a blood-sucking punk rocker in a tutu. We're definitely having fun with this," writer Matt Kindt told ComicBook.com.

Ninjak's international manhunt for the super-powered puppet masters behind the world's most dangerous – and most secretive – crime syndicate ratchets up the stakes when Matt Kindt and Raul Allen launch the first chapter of THE SHADOW WARS in NINJAK #6 – coming to comic shops everywhere this August!

Plus: Ninjak's essential second feature, THE LOST FILES, continues in each 40-page issue of THE SHADOW WARS! Also beginning in NINJAK #6, Matt Kindt and Eisner-nominated artist Butch Guice(Captain America) reunite to reveal how Colin King and Neville Alcott first met  – and the deadly secret Neville has kept from his most valuable field agent! The second act of THE LOST FILES starts here!

Cover A by MICO SUAYAN

Cover B by JELENA KEVIC-DJURDJEVIC

The New DC Studios Slate Is Only Half of Chapter 1