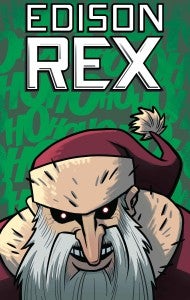 Aside from having one of the great, demented names and personalities in all of comics villaindom, the character was a whacked-out maniac in a book full of villains who generally have at least something approaching an ethic, even if it's a questionable or outright evil one.

We also got Edison's first team-up with a superhero, the introduction of the concept of legacy heroes the the series and, crucially, a hero who finally asked the $25,000 question: Does Edison know what happened to Valiant?

Roberson and Culver joined ComicBook.com to talk about the issue and give some sense for where the characters go next.

Reminder: This is a spoiler-rich interview. If you haven't read the issue yet, you should buy it and read along with us. In fact, the trade paperback collection of the first few issues just came out, so you might check that out, complete with an introduction by Kurt Busiek.

Chris Roberson: That one was a real team effort. Dennis did the figure work, of course, but he had the idea to incorporate the “Ho Ho Ho” design in the background, and John J. Hill and Steve Downer collaborated to make it work. (Me, I contributed nothing.) 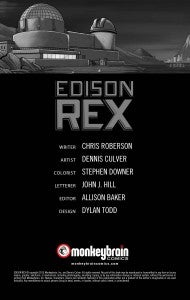 Dennis Culver: I tried doing the ho-ho-ho myself but wasn’t happy with it. Hill nailed it and then Downer brought it all together with his colors. I will say Chris pushed Maul Santa’s creepiness in the script beyond my initial design and that inspired me to go creepier. Our creep game is on point.

ComicBook.com: Eclipse has a little bit of a Batman Beyond feel to it. Was that on purpose?

Roberson: I’ve always loved the idea of legacy heroes, and especially the idea of sidekicks taking over their mentor’s mantle when they become adults. Dennis and I have worked out a LOT of backstory about the third Eclipse and what’s she’s all about, which we’ll be delving into a bit more in issue 10. As for any similarities to other heroes, living or dead? Dennis can correct me if I’m misremembering, but I do recall that we realized there were certain parallels fairly late in the development process.

Culver: Chris is right, we sort of stumbled into that similarity, but I’m okay with it. Legacy is a recurring theme in the book, I think, and it was certainly one of my favorite aspects of the old DCU.

ComicBook.com: It's also got so much history, and seems so unrelated to Edison other than the fact that they're set in the same world, it almost feels like the first character who could really have her own spinoff. Would building on the world of Edison Rex be something you're interested in doing eventually?

Roberson: It’s a tempting idea, but the more that Dennis and I have discussed it, the more I’ve been convinced that it makes more sense to keep everything in one title. I’ve always been impressed with things like Erik Larsen’s Savage Dragon or Paul Grist’s Jack Staff, where you get an entire universe of characters in one comic. It’s just more bang for your buck (and since we only charge $.99, I mean that literally!). 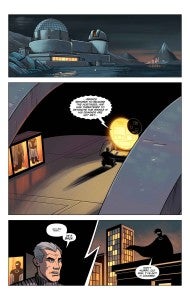 Culver: Never say never but right now I’m more interested in showing how these other characters reflect and contrast Rex.

ComicBook.com: So you wrote a holiday issue pretty early. Or is it pretty late? In any case, you got a good Christmas in July thing out of it!

Roberson: There were early plans for this to be a holiday special last year, but we ended up doing other stories instead. But this one was just too much fun to let it go to waste, so we decided to go the “Christmas in July” route. Hey, if summer blockbuster movies can do it, why not us?

Culver: We’ve been wanting to bring the third Eclipse on stage for a while and our idea for Maul Santa was the perfect introduction. It doesn’t HAVE to be Christmas for Maul Santa to go on a rampage but where’s the fun in that? Especially for his debut.

ComicBook.com: Was "pressing matters" supposed to be a pun? With the Nutcracker, I mean?

Roberson: If it was, I’ll never admit it.

ComicBook.com: You know, it's funny--I don't think we've seen someone totally oblivious to Edison's turnaround. Lots of people who don't believe him, sure, but did you have some fun writing a character like Maul Santa who's basically totally out of the loop?

Roberson: My take on Maul Santa is that he’s completely monomaniacal. Whether Edison claims to be a hero or not is completely beneath his notice.

Culver: Yeah he’s totally out of his mind. 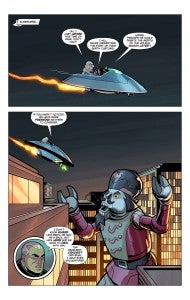 ComicBook.com: Do you look at that and go, "It's a good jumping-on point for new readers," too? Since everything kinda has to be made explicit?

Roberson: So far, every one of our issues has been completely stand-alone, and my hope is that any one of them would work as a jumping-on point.

Culver: The other end of that is we don’t really need to worry about jumping on points with digital. The first issue is always in stock.

ComicBook.com: I always kind of like the idea that some of these guys are just nuts. I mean, Edison so far has been pretty straight with the villains: "I'm doing better. You should too. No? Ok, then," and fight. Maul Santa he just says, "This dude's bat shit. It's time to fight."

Roberson: They have a history, those two. And as Edison says in the backmatter, he may have been a criminal for most of his adult life, but he’s no monster.

Culver: Rex is a genius and he knows a lost cause when he sees one.

ComicBook.com: I see this and I think of Invader Zim and Futurama. Do you have a favorite "evil Santa" from elsewhere in pop culture?

Roberson: I think the evil robot Santa from Futurama has to take the prize, hands down.

Culver: There’s a strong argument to be made for Chuck Jones’ version of the Grinch. 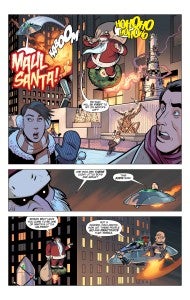 ComicBook.com: It kind of seems like, Valiant notwithstanding, almost everyone in Edison's universe who can kick your ass with their fists instead of their brains or tech is a girl. Is that on purpose or am I just reading into it?

Roberson: I live in a house with a woman who could kick my ass with both her fists and her brain. So maybe that colors my perceptions.

Culver: We’ve got some male brawlers too! Defiant and the Nuclear Norseman immediately come to mind. And we’ve got some brainy ladies too like Cerebella (the brainiest). Also, L.A.R.V.A. is brainy and brawny but crucially she doesn’t have fists.

ComicBook.com: I think the mistletoe panel, and the reaction face, might be my favorite panel this year.

Culver: I’ll take the bow but it was Chris’ demented brain that decided to give L.A.R.V.A. a crush on Rex.

ComicBook.com: It's interesting; I never really considered the idea that it isn't common knowledge that Edison killed Valiant. it is, after all, the premise of the series. I'm guessing we'll see more of Eclipse as she tries to figure out just what happened in the near future?

Roberson: We’ve seeded it in a few times in the background, in the crawl on TV news screens and the like. But yeah, so far as the rest of the world knows, Valiant just disappeared one day. But don’t worry, Eclipse isn’t the only one to ask that question, and it’s going to make problems for Edison going forward.

ComicBook.com: Will we get to find out what happened to the first Eclipse? It's...open-ended in the Rex Files.

ComicBook.com: I can't help but notice that both Eclipse and Gold Key are comic book companies whose work I have buried in a box somewhere. Were introducing those two names in the same month on purpose?

Roberson: In fact, both of them were introduced in Valiant’s “statue gallery” in issue 3, along with a bunch of other characters that have gradually popped up in the stories (and even more that haven’t yet). As I mentioned before, Dennis and I have worked out a whole UNIVERSE of characters for Edison’s world, and we’ve been gradually teasing them out and introducing them bit by bit as we go along. Many of the references have been hidden in the backgrounds, or in the “REXFiles” text pieces, but sooner or later all of them will appear “on stage,” one way or another.

Culver: In the first issues I drew an anti-Valiant in a glass case in Rex’s trophy room. And later I mentioned that it would be funny if that guy was named DEFIANT because that’s comics company Jim Shooter formed after VALIANT. Chris thought it was funny and somewhere along the way things escalated so that ALL of our heroes are named after comics publishers/imprints. There’s already been quite a few named, check your back issues because they’re everywhere! Our naming convention game is on point.

Maul Santa! What Else Can You Say? Chris Roberson and Dennis Culver Talk Edison Rex