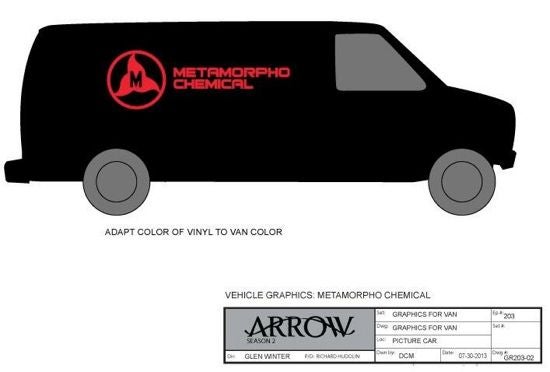 When it comes to superhero cameos in movies and TV shows, there are lots of crazy rumors that get started on the  Internet, most of which wind up not being true. However, this particular rumor comes from one of the executive producers of the TV series involved.

Arrow executive producer Marc Guggenheim tweeted the image above, along with the text, "Coming to Arrow Season 2…" The image is a mock-up of a van that will appear in Season 2 of Arrow. The Van has the name "Metamorpho Chemical" on the side. It could be that the name "Metamorpho Chemical" will just be an Easter Egg for fans, but Guggenheim had to realize that his tweet would launch speculation that Metamorpho himself will appear.

With the Flash set to be introduced during the second season of Arrow, why not introduce a couple other DC Comics characters as well? Arrow Season 2 will premiere on Wednesday, October 9, 2013 on The CW.