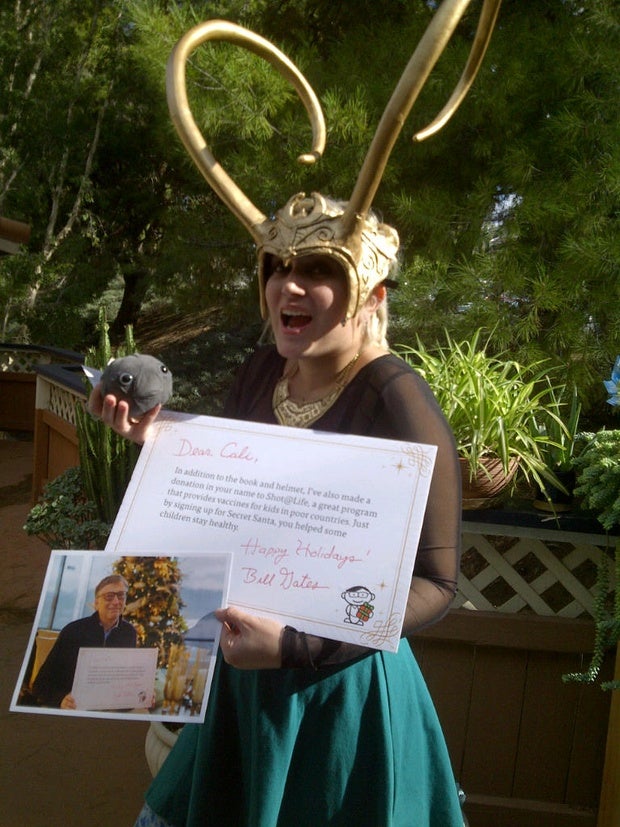 Is Bill Gates evil? Well, he apparently has access to some of Asgard's most notorious artifacts, so judge for yourself.

Or rather, he did -- until he gave it away as a Secret Santa gift, which seems somewhat less evil.

Gates, one of the world's richest men, participates in Secret Santa on Reddit. This year, he got user Calid7, who goes by "Cali" in the post where she enthuses about her gifts, which include her "pie in the sky" hope for a full-scale Loki helmet, as worn by the Thor and Marvel's The Avengers villain.

Here's how she described her care package, which also included a charitable donation in her name:

The amazing human being Bill Gates sent me a Loki Helmet which i have been dying to own ever since the first Thor movie came out!! He read my "pie in the sky wish" that i filled out in my questionnaire and fulfilled it! I also got an amazing coffee table book of gorgeous pictures of Africa (somewhere i desperately want to go, its on my bucket list!) with an inscription and a Giant microbes polio virus stuffed animal!

The Helmet actually arrived with the horns cracked :( but i'm pretty sure i can find a way to fix it! :D

The most important part is, He also made a donation in my name to Shot@Life a great program that provides vaccines for kids in poor countries which is SO amazing and i can't even begin to describe how incredible it makes me feel knowing that he made this donation in my name! I always donate what i can for charities, which is never much cause money is always extremely tight, it really makes me glow!

MLB The Show 21 Review: Perfect for Baseball's Biggest Fans, Frustrating for Everyone Else