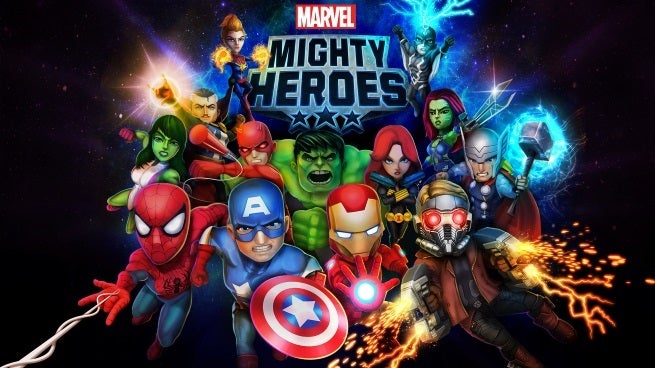 DeNA and Marvel Entertainment are teaming up again for a brand new mobile game, Marvel Mighty Heroes, a real-time cooperative brawler featuring the heroes and villains of the Marvel Universe. Written by Fred Van Lente (X-Men Noir, The Amazing Spider-Man, The Incredible Hercules), Marvel Mighty Heroes is available now as a free download beginning March 31 on the App Store for iPhone, iPad, and iPod Touch and on Google Play for Android phones and tablets.

Marvel Mighty Heroes taks players with assembling a team of Marvel superheroes, each with their own unique set of upgradeable abilities and costumes, to compete in missions, explore new areas, participate in multiplayer events, battle bosses and more. For the first time on mobile devices, up to four players can joing forces as Marvel heroes to take on Marvel villains.

DeNA and Marvel are wasting no time in getting the ball rolling with in-game events, the first of which will launch with Marvel Mighty Heroes.The first event is the Infinity series, featuring the Avengers and the Guardians of the Galaxy teaming up against Thanos, the Mad Titan.

"Marvel Mighty Heroes starts with old-school Super Hero gameplay from the glory days of playing alongside friends at the arcade and adds a modern twist for mobile devices through intuitive touch controls and global cooperative gameplay,” said Barry Dorf, Vice President of Partnerships and Alliances at DeNA, in a press release. “Marvel fans of all ages will love the timeless characters and evolving Marvel storylines based on classic plots and new story arcs.”

Visit www.MarvelMightyHeroes.com for more info. Players that pre-registered and download the game in the first week will receive a special in-game reward.

Check out screenshots from Marvel Might Heroes and the Infinity event in the gallery below.