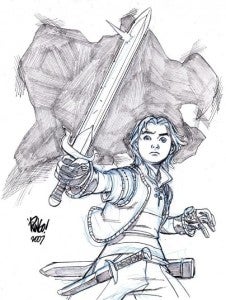 Beloved comics artist Mike Wieringo would have turned fifty years old today. Generally when we do birthday stories, it's for people who are still active in the comics community, but Wieringo--co-creator of Impulse and Tellos and longtime artist on characters like The Flash, Spider-Man and Superman--is a figure whose influence is still felt more than five years after his death, so noting the passage of a "milestone" birthday seemed appropriate. Wieringo passed away in 2007 at age 44. Shortly after his death, a special What If...? issue was released from Marvel, wherein Wieringo's final published art saw print with proceeds going to The HERO Initiative. Before his passing, he was an influential figure in comics for years and a well-liked and respected artist and person. He worked most notably and frequently with writers Mark Waid (on The Flash and The Fantastic Four), Todd Dezago (on Spider-Man and Tellos) and for his brief stint on the Superman titles, during which time he drew parts of the Our Worlds at War crossover and the story that led to Lex Luthor's Presidency. "Everything is moving in slow-motion this morning," Waid said at the time of his passing. "I have never worked with anyone more talented than Mike, more on my exact creative wavelength, and likely never will. Mike was one of the very best friends I have ever had and without question one of the two best partners." "He was my best friend. He was my brother. I will miss him more than I can say," said Dezago. Last year at New York Comic Con, ComicBook.com spoke with Todd Dezago and his other regular collaborator, artist Craig Rousseau, about the prospect of more Tellos in the future. "Honestly, I'd love to do some Tellos work and be involved in that but there is a very big shadow that I really would not want to be in on Tellos, because that's Mike's baby," Rousseau admitted. "I think your idea for the next arc, or story, is appropriate, getting other artists who were friends with Mike or colleagues with Mike or people that Mike respected and admired, to help pitch in and draw a chapter or a page or two or however many they can fit in their schedule." "Matt would have to be a key part of that. We have had a lot of friends of Mike's, a lot of friends of ours, who would easily fill out the whole book. In my outline, it's about an 85-page original graphic novel," Dezago told us. "I think we've got enough of Mike's friends–Cully Hamner, Kelly Yates, Michael Golden, Walt Simonson have said they'd be really happy to do stuff. So we would have a really nice roster of friends of Mike's and mine that would be able to bring the story to life in a unique way and not have to worry about Mike hovering over it." In 2008 his brother, comic artist Matt Wieringo, established the Mike Wieringo Scholarship, awarded annually at HeroesCon to help artists attending Savannah College of Art and Design.

Mike Wieringo Would Have Been 50 Years Old Today