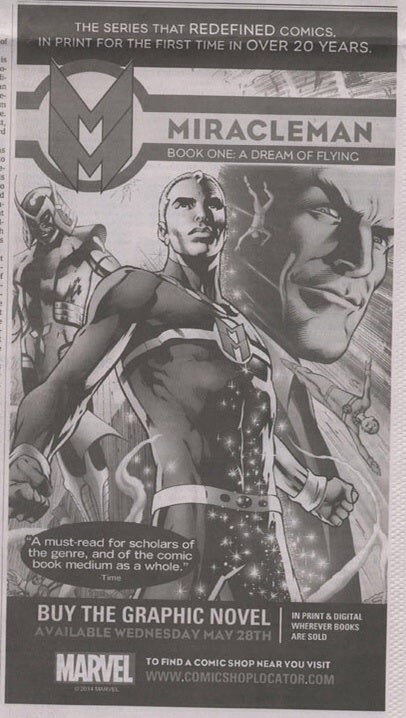 Following the announcements over the weekend that Marvel Comics was running ads for Miracleman at cinemas throughout the U.S., Bleeding Cool have now spotted an ad for the comic -- more accurately for the first collected edition in the series -- in the New York Times. The site again speculates about the prospects of a Miracleman movie down the line and speculates briefly as to whether a heavy promotional push outside of comics was part of the deal that brought the property to Marvel years ago. It seems equally likely, though, that what Marvel is doing is trying to establish their own Watchmen -- reaching out to readers in the bookstore market that might not otherwise read superhero comics but are swayed by things like Time magazine referring to the book in a scholarly context. While many of Marvel's more contemporary stories outsell DC's, and they've got the advantage of two to four movies a year to bolster those sales, DC have works like Watchmen and Sandman which are evergreen in the bookstore market and perform strongly outside of the direct market in general. Marvel is less strong in that area, which ultimately makes them more reliant on the direct market for support -- something that probably doesn't thrill parent company Disney who would no doubt love to make digital a bigger part of their business plan. Of course, if that's the case, it's a shame they can't actually use Alan Moore's name on any of the promotional materials for the series, as that would seem like a no-brainer if the point is to compete with books that have his name splashed all over them.