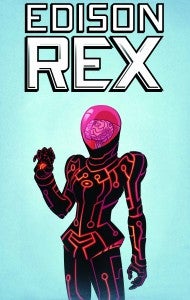 With the third issue of Edison Rex hitting the stands two weeks ago, it's pretty clear that we allowed convention prep and coverage to get in the way of our running commentary on the title, written by Monkeybrain co-publisher Chris Roberson and one of the company's critically-acclaimed launch titles.

This month, we saw Edison and his faithful M'Alizz pay a visit to Valiant's headquarters, carved into the side of a mountain, looking for a mysterious...something...that will help Edison rise to his potential as a hero. Along for the ride, M'Alizz pretty much is the muscle, taking on Valiant's automated defense systems and his army of robots while Edison lingers over the Batcave-like trophies and reminisces about past victories and defeats.

Roberson joined us to talk about the issue, what to expect from some of the items and characters buried in its pages, and what's next for Edison Rex once he seems to have achieved what he set out to this month.

That’s all the magic of Dennis Culver. The design came before the character or the name, actually. We had talked about a “cerebral” kind of character, to balance out the more physical presence of M’Alizz, and Dennis came back with that design almost immediately, as I recall. I think I took one look at her and said “Cerebella,” and that was that. 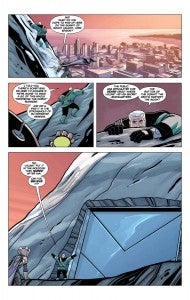 There's an awful lot that Edison and Valiant have in common, really, isn't there? The egomaniac thing, for starters.

They have more in common than we’ve revealed so far, actually. A big part of Edison’s backstory involves the character of “Gladiator Gladstone,” whose statue he lingers over in this issue. And Gladstone is a big factor in the backstory of Valiant, as well. We’re hoping to dig a lot deeper into their backgrounds in a few more issues, probably around issue 7.

Edison DOES realize when he says "I never got a chance to do it because, "well, you know...", that he precipitated the "Well, you know," right?

He does, and he feels a little sheepish about it. Like he’s almost embarrassed by the fact that he finally defeated his long-time nemesis. He’d gotten very used to the role of “villain” over the long years, and the confrontations with the hero tend usually to follow a certain pattern. I think at some level Edison feels like it was bad form to have won.

Do you have stories for all of the artifacts/ I mean, the RexFiles has some pretty basic outlines, but did you give it much more thought than that?

It’s a mix of things. There were a few items and artifacts that I specifically requested that Dennis include, but otherwise that’s all Dennis. The one area that we spent a LOT of time on, though, were the statutes of the various heroes and villains. We have rather elaborate backstories for all of them, and don’t be surprised to see any or all of them turn up sooner or later. 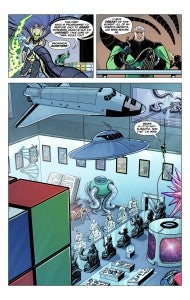 And the Rubik's Cube?

That was one of the things I specifically requested that Dennis include, but I’m not ready to reveal the story behind it yet!

I love some of the villains. Is Defiant basically a Bizarro version of Valiant?

I hate it when people respond to questions of this sort with “Keep reading,” but in the interest of not spoiling future plot points… Keep reading!

My favorite hero: Gold Key. Valiant? Gold Key? Get it?

M'Alizz is my vote for MVP of this issue. There's some great, quiet comic relief going on with her.

She quickly became one of my favorite characters to write dialogue for. She’s very straightforward and direct. But in this issue in particular Dennis suggested that there should be a signature sound-effect that accompanies her energy sword, and I’m pretty happy with what we came up with. 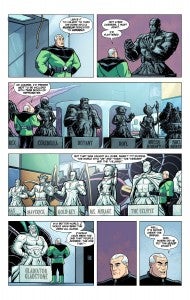 I love page 9's layout, too. It's a bit of a comic book walk-and-talk. Now I'll be reading Edison in Sorkin voice.

I actually apologized to Dennis in the script for that page. I knew that it would be really cool if we could pull it off, but that it would be a giant pain in the neck. But Dennis pulled it off with style!

So with Cerebella and M'Alizz, is Edison putting together a very demented Charlie's Angels?

They were originally conceived as being more like Doc Savage’s team of assistants, but once we started working out their personalities and backstories I started referring to them as “Edison’s Angels” in my notes. So… yeah!