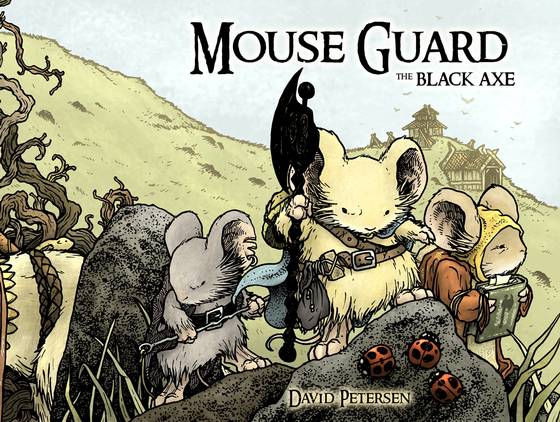 ith a collected edition on the horizon and the final issue of the miniseries due in stores in December, David Petersen has finally drawn to a close his years-in-development Mouse Guard: The Black Axe. USA Today has a look at the cover art for the hardcover that will follow, along with some thoughts from Petersen. The creator also spoke with me the week the final issue of Mouse Guard: Winter 1152 hit the stands, discussing his plans for the Black Axe, a series which at the time was still in his near future. Whereas Petersen's bestselling and highly-praised first series took place in the fall of 1152, immediately prior to the second miniseries, the third focuses on the world of Mouse Guard's past, telling the story of The Black Axe, also known as Celanawe, the elder statesmouse of the series. In the context of the mice's history, The Black Axe is an important figure whose service in the Guard is legendary. In the context of the story, Petersen described him primarily as a mentor. "The Black Axe character came to me as the idea of like an Obi-Wan character where the way we were first introduced to this character is as Alec Guinness--the old wise master, and even though he's this old guy he still went toe-to-toe with Vader," explains the author. "This guy was still pretty cool, still pretty bad-ass. And then with the prequels we see him as Ewan McGregor and we get to see what he was like in his heyday. So that's what the idea of the Black Axe character was--let's see this old guy who can still keep up with the youngfurs and go toe-to-toe with the predators. But the idea with the next story, the Black Axe story, was let's see Celanawe in his heyday."