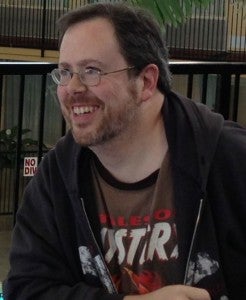 At the Murfreesboro Anime and Comic Kon, My Little Pony artist Andy Price took time to answer questions from fans. The My Little Pony: Friendship is Magic comic series by writer Katie Cook and artist Andy Price has proven to be a huge hit for IDW Publishing. The first issue of My Little Pony: Friendship is Magic sold over 100,000 copies, which made it the best selling comic in the history of IDW. Andy Price said, "When the comic originally started, it was supposed to be a limited series. They didn't expect it to be as popular as it was. So it is now an ongoing comic. So as long as you guys keep buying, we'll keep making it." Andy Price added, "The way the comic is working is we are doing four issue long stories. So issue one through four is one story, issue five through eight is another story. So the next story arc is already in the works." When asked about coordinating the comic with My Little Pony TV show, Andy Price said, "We had a story planned, and Hasbro was like 'You know what? We're doing the same thing. So yours is out.' It's Hasbro's baby. We're just playing in the sandbox." Andy Price explained, "The episode they did recently where the Crudaders went 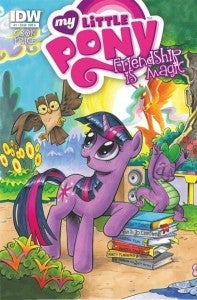 camping and Scootaloo was all scared. We had that same scene in the first issue. We had to cut out four pages of the book and redesign it, because they were like we've got the same thing, and with animation their plans are way ahead of ours." Even though doing a comic book based on a TV show based on a toy line can present its challenges, Andy Price pointed out, "Hasbro has actually been very, very good to us. For something they could easily come in and say, 'No, this has to change, this has to change,' and when I set out I was like I'm not interested in drawing exactly like the show, because then I'm not the one really drawing if there's not any of me in it. And they were fine with that. I was very surprised. There are certain things where they want a little bit more show accuracy, but like the big liberty I take is on the show they draw the wings kind of fluffy and cloudlike and I draw bird wings. I draw them scaled to their body and I draw feathers. And they were like ok. I was surprised, but they were like as long as the art is clean." As far as advice for others wanting to get into the business, Andy Price said, "When you talk about projects, the more you enjoy a project, the better your result is. If My Little Pony had been thrown in my lap as a job, before I knew what the product was, I don't think I would have had nearly as much fun. And Katie Cook the writer and I have so much fun with the book because we make it more for ourselves than for anybody else. And I think that is one of the keys of success with project like this."

My Little Pony Artist Andy Price Talks About The Comic