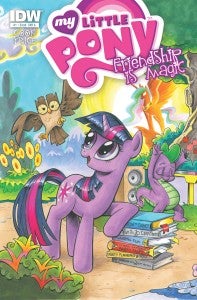 , the IDW Publishing adaptation of the Hub TV series, has sold its millionth issue, the publisher reported this morning.

To celebrate the milestone, issue #12 of My Little Pony: Friendship is Magic, due in stores this month, will boast an extremely rare variant cover that will be limited to twelve copies total. According to the publisher, "These twelve copies will be dispersed via multiple contests and charity auctions to those fans and retailers responsible for the incredible success of the series."

“We have a great relationship with Hasbro, one we’ve always been very proud of,” said IDW CEO & Publisher Ted Adams, “so selling a million copies is a really big deal, but to be able to celebrate the achievement with Hasbro makes it even sweeter. ”

“We’re excited to be celebrating this important milestone with IDW,” said Michael Kelly, Hasbro’s Director of Global Publishing. “They’ve understood what MY LITTLE PONY is all about from the start, which is proven by the fact that their comics appeal to fans of all ages, including young girls who traditionally haven’t had many comics directed toward them. Also, we love the fact that we can commemorate this special event by benefiting others in need of the magic of friendship.”

My Little Pony: Friendship is Magic Sells Its Millionth Copy