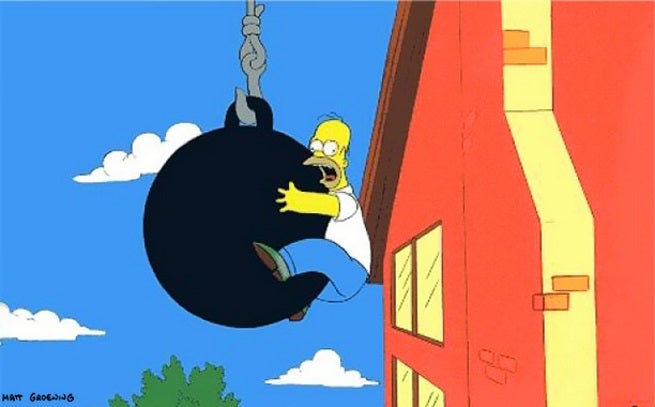 Having already made contact with Futurama and Family Guy this year, The Simpsons will participate in another crossover event, this time with Mythbusters. According to Entertainment Weekly, hosts Adam Savage and Jamie Hyneman will attempt to disprove myths inspired by The Simpsons when Mythbusters returns for its 13th season premiere.

"We set out to test Bart throwing a cherry bomb into the toilet that makes all toilets in the school act like geysers," Savage tells EW. "And then there's one [from season five's "Sideshow Bob Roberts] in which Homer's house is about to be destroyed by a wrecking ball and Homer places his body between the wrecking ball and the house to keep it from being destroyed."

"Several people were like, 'This is a cartoon! What can you do with this?'" Savage says, describing the initial behind-the-scenes debate over the Simpsons-centric episode. "We looked through many, many, many different bits on The Simpsons, but I think that we found stuff that really is entertaining and not totally outside the realm of physics—unlike, say, Wile E Coyote stuff might be. We reached out [to The Simpsons producers], and they were totally into it."

This will be the second time that Mythbusters and The Simpsons have crossed paths, as Savage and Hyneman were guest stars in a 2012 Simpsons episode that parodied their show.

"That felt like a bucket-list item more than almost any other thing that we've experienced doing our show," Savage says.

The Simpsons episode of Mythbusters requires the team to wreck two houses, and to build a life-size Homer Simpson.

This will be just the first pop culture inspired episode of Mythbusters Season 13, with episodes based on Breaking Bad and Indiana Jones to follow.