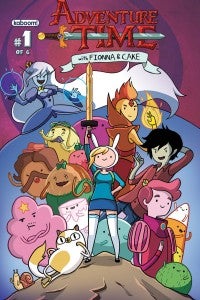 , a six-issue miniseries from the characters' creator and Adventure Time storyboard artist Natasha Allegri, will launch from Boom! Studios' Kaboom kids' imprint in January, with what they're describing as "a full 32-page first issue." Since most comics are solicited at 32 pages, but 12 of those are ads and other incidental material, it seems likely this distinction is meant to suggest that either the issue is ad-free, or that it will at least ship with 32 story pages and additional space will be added to accommodate the ads. Featuring two fan-favorite characters from the hit animated series (which Boom! has been adapting into comics for a while now), this marks the second announcement from Adventure Time creators in as many weeks, after series creator Pendleton Ward debuted the first issue of his Bravest Warriors comic book in a New York Comic Con exclusive ten days ago. "When Fionna rescues a feral flame boy from a pack of wild fire lions, it starts her on a quest she'll never forget," promises the solicitation for the first issue, which will ship with covers by JAB, Joe Quinones and Vera Brosgol as well as Ethan Riley and Frank & Becky limited edition variant covers.