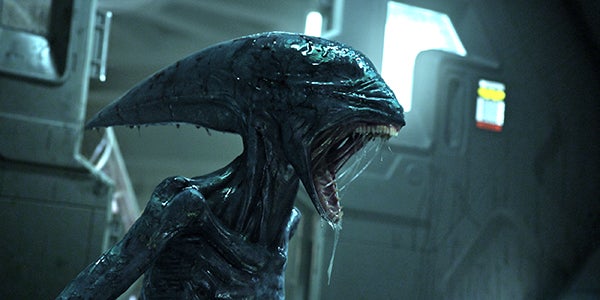 The Prometheus sequel will reportedly debut an entirely new extraterrestrial to the world of Alien.

Bloody Disgusting unearthed an interview between Ridley Scott and The Australian, where the Alien Godfather teased an entirely new species of alien in his eventual Prometheus sequel.

"The alien's real which is why it's probably one of the scariest monsters in film history," Scott told the news site. "So with Prometheus 2, what I'm trying to do is reintroduce a fresher form of alien in the third act."

Scott also mentioned that he is staying away from any species used in past Aliens films, going so far as to say, "If I see one more dragon I'm going to shoot myself. Stop the dragons." The use of God and Satan, another popular rumor surrounding the sequel, was also refuted by Scott.

A release date for Prometheus 2 has not been set, though it  is rumored to land in theaters sometime in 2016. Scott said that the script is finished, describing it as "really good."

New Alien To Be Introduced In Prometheus Sequel