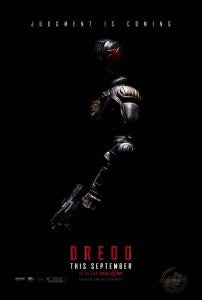 The film, which hits in November, will be the first time American film audiences have seen the character since the ill-fated Sylvester Stallone vehicle Judge Dredd, which was widely met with derision, but became a kind of underground classic in the vein of a Mystery Science Theater 3000 movie. The blockbuster TV series Scrubs made frequent references to the awful movie as a favorite of the characters in-story.

Check out the teaser at left and let us know what you think!