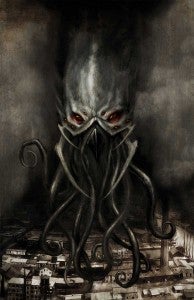 IDW Publishing is known for their delving into the strange and the macabre with skill and great art, and this newest announcement should fit perfectly into that area! The company has announced that they will be releasing a new miniseries based on the work of H.P. Lovecraft this October with H.P. Lovecraft's The Dunwhich Horror, a modern update of the 1929 short story from the American writer. For those unfamiliar with Lovecraft, his work includes stories of science fiction, horror, and perhaps most notably, the Cthulhu myths and stories! This particular story was originally set in the town of Dunwhich, Massachusets and depicts a sorcerer's grandson as he searches for a magic textbook with amazing powers.

Updating the tale for the 21st Century will be writer Joe R. Lansdale and artist Peter Bergting. Lansdale, a seven-time Bram Stoker Award winner, brings a passion and a love for the subject to the story, saying, "It’s flattering to be working on a Lovecraft project, one of the most influential horror writers of all time." The four issue mini will also feature an adaptation of Lovecraft's "The Hound", another famous short story. This will be penned by Lovecraft historian Robert Weinberg with art from menton3. Fans of Lovecraft will rejoice, as this release coincides with the release of The Lovecraft Library, Volume 1: Horror out of Arkham, a 200-plus page collection of Lovecraft's stories with art by menton3. Just the thing for those Lovecraft fans in your life!