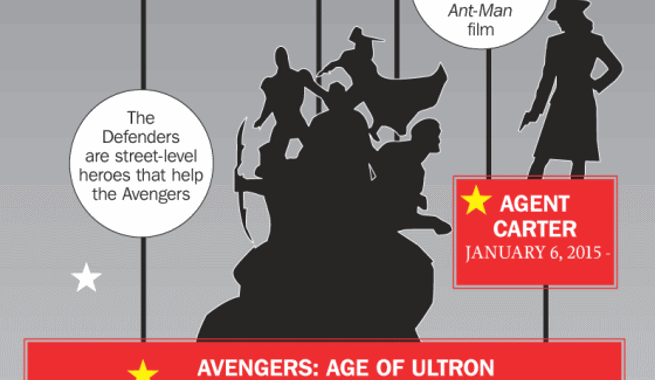 With Avengers: Age of Ultron bridging the gap between Marvel Studios' Phase 2 and Phase 3 films, plus several television projects, Marvel has a lot of balls in the air. With Marvel's favorite catachphrase being "It's All Connected," it might be a little intimidating to try to connect the dots between all of the past, present, and future Marvel Cinematic Universe projects.

Time has put together an infographic that maps out the connections between Marvel's movies and television series, including the Netflix Defenders shows, ABC's Agents of S.H.I.E.L.D.and Agent Carter, current films Avengers: Age of Ultron and Ant-Man, and Phase 3 movies like Captain America: Civil War, Thor: Ragnarok, and Captain Marvel.

Some of these connections are speculative, or based on relationships from the comics that are not confirmed to exist in the cinematic universe, but it's a handy visual helper nonetheless.