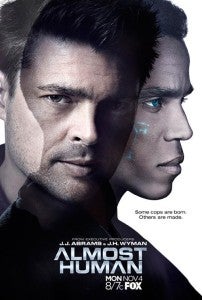 , Karl Urban's newest turn as a futuristic lawman, is slated to debut on Fox later this fall. Produced by Star Trek's J.J. Abrams, the series revolves around Urban's character, a police officer who is forced to partner up with an android played by Michael Ealy, even though he doesn't particularly like robots. "The overlap — the Venn diagram of these two shows — would be that they're pushing the edge of technology and what might be possible in that regard," Abrams said at a press conference when asked to compare the series to his late, lamented Fringe. "But the series themselves are completely different types of shows. What they're dealing with in this type of show is much more a cop show that you might feel is familiar with a wrench thrown into that, with the huge adjustment being that the cases themselves aren't what you've seen before. The truths of the differences between these characters are atypical because of the world of which it takes place."