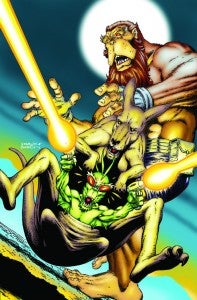 Last week, Todd Dezago and Craig Rousseau were preparing to leave for the New York Comic Con when Dezago began receiving more than a dozen large boxes at his Upstate New York home. Unexpectedly, it was Tellos Collosal Volume 2, a long-delayed hardcover collecting a handful of stories written by Dezago and drawn by other artists, set in the world of Tellos, the creator-owned series Dezago invented with the help of his friend and longtime collaborator, the late Mike Wieringo.

Rousseau was one of the artists in the collection, marking one of his earliest collaborations with Dezago, the writer with whom he would go on to create The Perhapanauts.

That critically-acclaimed, creator-owned series began as a pair of miniseries at Dark Horse and then evolved into a full-fledged ongoing at Image Comics before scheduling conflicts forced it off the rails.

It's been a long time since the last monthly issue of The Perhapanauts was released, and in the meantime they've had a Halloween-themed one-shot, another that failed to take off, and both Tellos and The Perhapanauts almost made it to production as motion comics before the whole thing fell apart.

It'll be with a considerable exhalation of breath, then, that the creators see the release on November 7 of The Perhapanauts: Danger Down Under #1, the first of a five-issue miniseries that sees the oddball teaming of paranormal investigators facing an all-new threat while working with their Australian counterparts in an unfamiliar headquarters. With a variant cover on the series' first issue by Thanos creator Jim Starlin, the series will kick off as a monthly again, with Rousseau on art chores but Comic Con Episode IV: A Fan's Hope standout Eric Henson drawing backup features. Dezago says that they've been keeping in touch with the old readership while cultivating new fans all this time and that he feels pretty good that Danger Down Under might--gasp!--actually make money.

Dezago and Rousseau joined ComicBook.com at the New York Comic Con to discuss their numerous projects and look forward to the first new Perhapanauts in years.

So it's been a while--but you guys have new Perhapanauts out, which always excites me!

Craig Rousseau: Yes we do!

And you've got an ashcan here at New York Comic Con, but for those who don't have access to that, what's coming next? 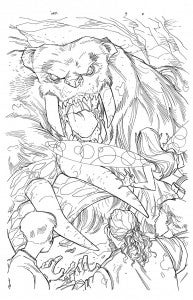 Todd Dezago: The next miniseries is called Danger Down Under. We kind of left our characters in the Australian sister facility of BEDLAM, where they're kind of trapped, but they get there and there's an adventure of their own going on for the Australian team so our team has to kind of come in and help out.

They're going after a creature from Australian folklore that the Aboriginals talk about called the Bunyip. It's supposed to be a large, bear-like creature with walrus tusks and webbed claws.

But as usual the things that happen in The Perhapanauts don't go the way that they expect them to. A lot of things get set up but nothing gets rectified easily.

It's been a while since we left them in Australia. Did you guys know going in what the next arc was before you took the hiatus?

CR: Well, it wasn't exactly a hiatus. I've been working on it ever since, a page here, a page there, but we actually do a simple, two-page recap to catch our readers up-to-speed and to catch us up to speed.

What else are you guys working on? Obviously, Craig, you do a lot of non-comics stuff for Marvel, doing spot illustrations in their children's books and stuff like that.

CR: Right. I've been doing a lot of work for Disney Press, doing storybooks with the Marvel characters and doing covers and spot illustrations for Marvel Magazine, Marvel Superhero Magazine.

TD: Both Craig and I have been involved doing some all-ages stuff at Marvel, where you're still under the radar and get to tell stories that are fun. I just wrote an Ultimate Spider-Man based on the cartoon show--an Ultimate Spider-Man story that we're pleased to say Craig is drawing! So we're getting to finally work at Marvel on something together. We're hoping that gets to be a lasting thing. I also just wrote one for the Avengers cartoon comics that Chris Jones is going to draw.

CR: And I drew one that you did not write.

TD: That's true--oh, is that the Magneto one?

What's the difference in that dynamic, in terms of working together on a Big Two book versus your creator-owned stuff? Didn't you work together on Impulse like 100 years ago?

CR: We actually never worked on Impulse together.

CR: I quit, actually, the day he got hired.

TD: Oh, that's right! We had been friends. We had met at conventions and had been friends and had hung around together. And they called me up and offered me Impulse and I got so excited I was finally going to be able to work with Craig.

CR: Which was good, because they were going to fire me. 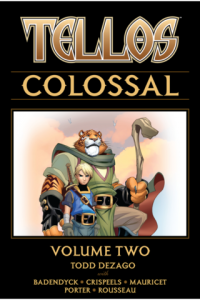 TD: Well, they were trying to change the team up and make the book something different. But then we worked on a Tellos project together, which is reprinted in the Colossal. And then we decided we wanted to do our own thing and that's where the germ of The Perhapanauts came from.

CR: Which is different than the Marvel work. I mean, the Marvel stuff, you wrote as a script that I was drawing like I would any other script. It came in fully written, ready to go, whereas Perhapanauts is a little more give-and-take.

TD: Perhapanauts, we do Marvel Style, which Marvel doesn't do anymore.

Marvel Style is where the writer writes a plot, sends it to the artist, the artist then interprets that. The writer gets it back and puts in the dialogue. Since Craig and I do a lot of the production ourselves, like the lettering, I can dialogue right on the page when Craig sends it back.

But usually, and this happens a lot just on Craig and I because we've worked together so much, he and I are on the same page. I've told him what they're thinking or what the expression was or what's going on in their heads, and he puts it on their faces. So I don't have to have them say, "I'm happy" or "I'm sad." Craig's already done that work and it's a much more collaborative experience.

With Marvel, they want full script, so I wrote the full script and I don't have a chance to play with it or tweak it or bounce off Craig's artwork in that respect.

Alright, so tell me about the Tellos book. As you've said, this has already been delayed a few times.

TD: I'll take the hit for the first year or two, why it didn't happen, because anytime I approached any Tellos material, it was a little bit of an emotional battle. But then finally I was able to get down to it--got on board with a couple of people at Image, Vince Kukua and Tyler Shainline, and we really worked together to get it together and also to find missing files that I didn't realize were gone.

Some things had to be re-lettered, re-written completely, recolored. So there was a lot of extra work that went into it, but it's out now. This is everything that we've done so far and hopefully there will be more Tellos in the future but I'm not going to promise when.

And sadly, the last time we talked we discussed the Tellos motion comics, which of course have turned out not to happen. Are you still hanging onto that story?

TD: I have that story and I think it's a lot of fun. It's a very light-hearted jaunt for Hawk and Rick, the two thieves. And yes, someday I would like to publish that but overall I'd really like to visit the epic that Mike and I did, and revisit those characters and see what happens when those who had survived come back together in the world that has been left behind the adventures of the first Tellos saga.

Well, and is this one of those things where in a perfect world you would work on it with Craig?

CR: Honestly, I'd love to do some Tellos work and be involved in that but there is a very big shadow that I really would not want to be in on Tellos, because that's Mike's baby. I think your idea for the next arc, or story, is appropriate, getting other artists who were friends with Mike or colleagues with Mike or people that Mike respected and admired, to help pitch in and draw a chapter or a page or two or however many they can fit in their schedule.

And of course Matt [Wieringo], because Matt has contributed to the Perhapanauts, too.

TD: Matt would have to be a key part of that. We have had a lot of friends of Mike's, a lot of friends of ours, who would easily fill out the whole book. In my outline, it's about an 85-page original graphic novel. I think we've got enough of Mike's friends--Cully Hamner, Kelly Yates, Michael Golden, Walt Simonson have said they'd be really happy to do stuff. So we would have a really nice roster of friends of Mike's and mine that would be able to bring the story to life in a unique way and not have to worry about Mike hovering over it.

Do you see this more as a series of graphic novels as opposed to something you could ever put into a serialized, floppy comic again?

TD: I think that in my mind right now, it seems like it would be better as one big, thick OGN, but who knows? As time goes on, I doni't know if there will be floppy comics for that much longer. Maybe it could be available in chapters as digital? I don't know, I'd have to see.