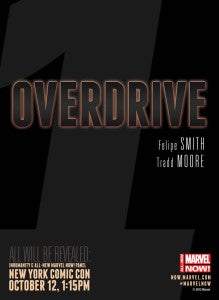 Felipe Smith And Tradd Moore are the latest creators attached to one of Marvel's high-profile All New Marvel Now titles, this time to be announced as part of the Inhumanity panel at New York Comic Con on October 12.

Teased only with the single word "Overdrive," this one seems one of the most inexplicable of the one-word teaser images that the publisher has been circulating--two a day for the last week and a half.

If these are all indeed new #1 issues, as seems to be suggested by the omnipresent "1" in the background of each, expect a spate of Marvel cancellations, as it would be nearly impossible to keep the line running as it is and churn out a minimum of 16 new books as well.

Of course, fans can always hope that the "1" in the background suggests a free #1 digital issue, a la the most recent South by Southwest gimmick...!