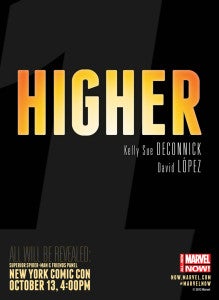 and Avengers Assemble writer Kelly Sue DeConnick and artist David Lopez will go "higher" in a new Spider-Man title to be announced at the New York Comic Con, according to a teaser image released by Marvel earlier today. DeConnick has been rumored to be leaving Avengers Assemble for a while now, with Warren Ellis joining her to co-write in December and a change for the title expected in January; it's likely that Marvel will make such announcements either at the convention or the week before in an exclusive reveal through the mainstream press. The "higher" teaser is the latest in a long line of them--two a day for more than a week now--teasing what look to be All-New Marvel Now #1 titles to be announced at New York. The DeConnick/Lopez announcement will come on the show's last day, Sunday October 13, at 4 p.m. during the Superior Spider-Man panel.