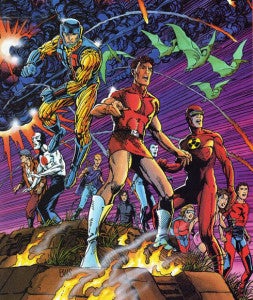 This weekend at New York Comic Con, Dynamite Entertainment announced that they will bring the Gold Key characters back to life, with (among others) Valiant writers Greg Pak (Eternal Warrior) and Fred Van Lente (Archer & Armstrong) writing. It wasn't long before fans began to wonder whether Turok, Magnus and the other Gold Key characters who were once part of the '90s Valiant Universe, might return to their old stomping grounds and take up alongside X-O Manowar and the like again. That was the very first question at today's Valiant: Must Read panel at New York Comic Con, but the answer, according to CEO Dinesh Shamdasani, is a clear-cut no, at least for the time being. While everyone at Valiant is excited by Van Lente and Pak making their mark on the characters, a crossover isn't in the cards, Shamdasani said. That jives, if one thinks about it, with other statements made at the panel about film and video game development: essentially, Valiant is a comic book publisher, and whatever they do, will be done in a way that doesn't detract from the core of their business, which is publishing the best monthly comics they can. Certainly a crossover with another publisher might tax resources better spent elsewhere. It might also be a bit difficult for Valiant Entertainment to work with Dynamite, who were among those bidding for the Valiant characters when the rights were up for grabs not long ago. It was, ultimately, a long and bitter process and by the time all was said and done, there aren't a lot of people involved who were still on speaking terms.