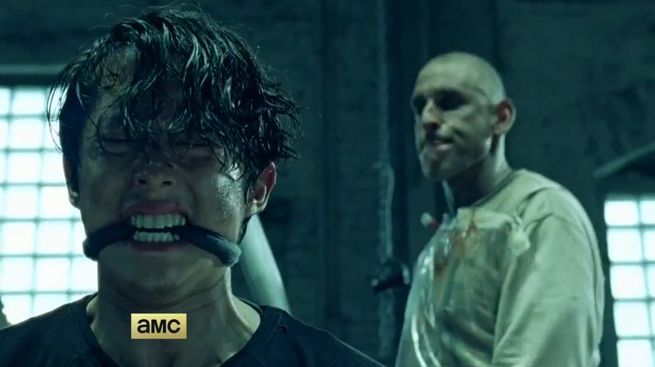 Gimple introduced the start of the season premiere.

The audience, as you would expect, approved. The panelists joked that they should get together every week to watch this way.

Hardwick asked what they learned from previous seasons.

“This season was much different because we picked up right from last year,” Nicotero said, explaining that they didn’t have to contextualize for the audience where the characters were and could get right into the action. He said he got chills watching it. He said that he loves directing Gimple’s scripts, and that he feels the show couldn’t be in better hands. He said that every emotion fans have experienced over the five years of the show come in a microcosm this week -- but not a lot of humor, although there might be a dance number.

“It’s going to be more recent past. There’s something about The Walking Dead that very much exists in the present and to that end we’re going to look into the recent past in a very deep way,” Gimple explained, saying that they’re also going to play with time.

“We saw Gareth in very different circumstances at the beginning of this so that’s an example of, yes, we’re going to try to tell everybody’s stories and give a little bit of a sense for why they are the way they are.

Kirkman said that there are a lot of big moments form the comic book series that will be coming up on the show this season. “We’re still going to be changing things up quite a bit and I’m very excited about those changes,” he said, “but I think it’s safe to say that this season is probably going to follow the comics a little bit closer than we have in the past.”

Gimple noted that Nicotero takes panels from the comic book to use as visual inspiration when he directs.

“When I directed episode 9 last year, that was probably teh closest aadaptation we’d ever done to the graphic novel,” Nicotero added.

“We just took that story and added pudding,” said Gimple, and plugged the Bad Lip Reading. They said that people just yell “pudding” at Chandler Riggs all the time.

Hurd said that the new season is “utterly relentless and totally heartbreaking.” Hardwick said that he never realized that he was going to have to be a therapist to people when he took the Talking Dead job.

“It is a weird thing when we’re doing the script and doing the cuts -- especially when we have episodes that are just devastating, and there will be a few of them,” Gimple said, saying that he actually thinks about how Hardwick will respond afterwards. Kirkman joked that their goal is to eventually make Hardwick cry so hard he’s unable to do the show.

Hardwick said that he has people approach him and thank him for “helping them through” the deaths of characters.

Hurd announced that the midseason premiere of The Walking Dead will be on Sun., Feb. 8 on AMC.

“I think it’s safe to say this season I’ve been listening to a lot of Prodigy and death metal,” Lincoln said of his character’s turn to being more badass toward the end of last year.

He’s a bit grounded and a bit out of control in his intensity, Lincoln said. “He’s been the complete sort of package,” he said, comparing the current Rick to Shane, calling the characters uncompromising and saying tht he’d “killed so many people.” Kirkman interjected to promote Fury with Jon Bernthal.

“I remember phoning Mr. Gimple and said we’ve always been very responsible about violence in the show and I think there was a line in the sand that was drawn -- are we stepping over it?” Lincoln said of the moment where Rick snapped and ripped out Joe’s throat last year, saying that he’s got “particularly bad, British teeth” that worked particularly well.

“I think that the amazing thing at the end of Season Four was that we actually found each other and there were points in there that it seemed impossible,” she said. “When she actually finds him, I think it is such a sense of strength to her that everything else is possible. They leave the prison after losing Hershel and it’s so important for anyone in this prison to find an actual task….So now it’s moving on to finding my sister.”

“We either choose to be hopeful and to carry on or not to,” she said. “I’d rather choose the former.”

Cudlitz asked who had been there when he was introduced last year, and said, “The whole experience has been fantastic. Everyone up here and down in Atlanta have been extremely cool. I feel like at times I’ve been here from the beginning. There’s a warm, creative environment...every single person on this stage and every character in this world has a massive loss up to this point.” He said that if you don’t use that to inform your performance, it doesn’t ring true.

Gurira said taht the thing she loves about her character is that she’s got an “unapologetic strength” to her, and that she’s got layers that you keep peeling away to learn more.

“I think that she always wanted to love again but she was just so scared to do it she built armor around herself,” she said. “But being around these people allowed her to love again.”

She said that Michonne now has a different kind of strength.

McBride said that people will tell her all the time on the street to look at the flowers.
“Even in the grocery store with flour, they’ll say, ‘Don’t look at the flour,’” McBride joked.

“It’s been the time of my life,” she said of Carol. “It’s been something I’m so proud of for the character; it’s been something that I never saw coming.” She teared up, saying that she loves her character, to thunderous applause. She said that she’s very touched by her relationships with the cast and fans.

Hardwick opened up the microphone to a Q&A, then moved on to Chad Coleman.

“First of all, that’s the most noble thing a man can do, is protect a woman or a child,” Coleman said of Tyreese’s relationship with Judith. “But it’s an unrelenting, unforgiving world. It’s a tough job. Somebody’s got to do it, and he has such a big heart.”

He added, “Community matters to him and children are the future, but he and Carol just went through an incredibly moving experience with Lizzie and Mika so he’s shaken, man.”

“Forgiveness is one thing, living it out is another,” he said. “He’s on shaky ground, he’s trying to find his footing.”

Hardwick asked Green how her pregnancy has affected the way she approaches the show.

“I think it has a subconscious effect if not a conscious one for sure,” Green said. “You start to see the value of life on a different level than ever before and it makes you tune in the prevailing messages of hope and struggle and family and love. These are pillars that you want to teach your children and it’s almost like they show themselves more clearly when you’re carrying life inside you.”

“It goes back to what people said, hope drives the show,” Reedus said of Daryl’s evolution. “We really care about each other so teetering on that line of being ferocious and being vulnerable is a constant teeter totter for us and I think it feels really really real.”

He compared the season to a stunt jump -- that once you’re off and running, your trajectory is set and it just keeps going. “I would love to tell you where we are right now, but there’s a lot of different ingredients in this,” he said.

During the Q&A with fans that followed, here's a quick rundown:

Gimple Rick's F-bomb at the end of Season Four, seen on the Blu-ray, is the version in the script, but that there was a blank gap in the line on AMC, so that it was "You're ____ with the wrong people." "I only did one take with 'screwing,'" Lincoln said. "It says 'f--k' in the script."

Hardwick noted, "It's funny how network TV works now, you can show a guy ripping somebody's throat out, but no swearing!"

Asked about Glenn's life before the apocalypse (he had referenced sisters in the first season), Yeun said that he pictured himself as the baby of the family, and that now he gets to be the big brother he never had the chance to be.

Lincoln said "I stay in dialect as much as possible" during the seven months of shooting, in response to a question about keeping his accent consistent.

A man came forward saying that the show has helped him cope with memory lapses and other disabilities sustained after attempting to help a woman being attacked.

"What you have told us is not easy to share and it blesses us, as well," Gurira told him.

Notoriously averse to scary movies before coming on board the show, Gurira said she "had to talk myself through the science of zombies" to get to sleep. "Ok, I'm on a higher floor, it can't climb..."

Reedus once again confirmed that they're developing a "badass" Boondock Saints 3.

They concluded the panel with a second screening of the clip.