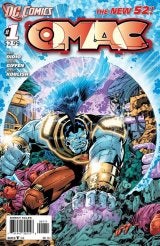 DC's relaunch is truly trying to appeal to a vast population, and most comic book fans will find something that they'll love and enjoy, and even people who have never picked up a comic before are probably seeing what DC has been putting out over the past week and finding something that appeals to them. There are several "non-superhero" comics as part of this new endeavor, and OMAC #1 looks to be a part of it, appearing so far to be a mix of secret technologies mixed with an unusual sense of genetic experimentation. Focusing on the mysterious workings of Cadmus Industries, OMAC takes a new course from the previous incarnation's use as a robot that sought out metahumans during the Infinite Crisis and later popping up in various incarnations in the DCU and its titles. This latest entry begins with a bit of a limp, not seeming to find a good balance in its introduction of a strange, dual-identitied figure that seeks out the secrets lurking under Cadmus and a strange series of experiments, all masked by the oblivious employees working well above the secret facility.

First issues are certainly a tricky thing, and I do realize the danger of completely judging an entire series based on its first issue, and that's not what I'm doing. Simply put though, first issues can really hook you in or drive you away, bore you, excite you or a host of other things. For this particular book, OMAC #1 just doesn't seem to lay any coherent groundwork for its next step. There are several different voices going on in the series, and while there are pieces of the opening that could work, it's not as arresting and captivating as a first issue could and should be. The scene opens with Cadmus employee Jody Robbins searching in vain for her boyfriend, fellow employee Kevin Kho, who is missing for another lunch date. Soon after, a rampaging, blue, super strong figure called OMAC bursts in, creating havoc and searching for the Cadmus mainframe. We soon learn, during the creature's search, that he's being guided by an outside agent that keeps chatting in his ear, which quickly leads him to a secret part of Cadmus that only about 10% of the workers know exists.

There's an interesting look to the issue, courtesy of Keith Griffen and Dan Didio, who both wrote the work as well, and that helps to add some appeal to the piece, and I thought that the book had an interesting look that reminded me of Jack Kirby's work on the original character named OMAC. This may have been unintentional, but I couldn't help notice it and thought it was a nice nod to the character's past. On the narrative side, the secret lab becomes the focus as the creature attempts to access the mainframe for the unknown voice guiding him, and a preview of just what kind of experiments Cadmus has been conducting becomes apparent. We cut to the end where Kevin Kho returns, almost in a predictable way if you see the opening of the issue. There's nothing too exciting or engaging in this first issue that seems to really establish a compelling story. So much is focused on the creature's search for the mainframe that nothing else seems to matter, and, again, I understand the trick that a first issue has to pull off. It's a series of loud noises, explosions, dumb fighting and not much else. The humans who will undoubtedly fill in the gaps in future issues are an afterthought here. The monster's power is impressive, but it's nothing that hasn't been seen before in better form. Grade: C-/D +