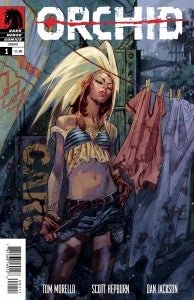 Republican Vice Presidential candidate Paul Ryan recently cited the left-wing protest-rock band Rage Against The Machine as one of his favorite musical acts--but like when Ronald Reagan embraced Bruce Springsteen in 1984, it seems he may have underestimated the political passion of the object of his affection. In a new op-ed at Rolling Stone, Tom Morello--the Rage Against The Machine frontman who writes Orchid for Dark Horse Comics--made no bones about his disdain for Ryan, who has reportedly said that he "likes Rage's sound, but not the lyrics." The searing op-ed is certainly not surprising to anyone who knows not only Morello's politics, but the fact that he's rarely quiet about his opinions (he recently participated in the Mayday "Guitarmy" for Occupy Wall Street), and the whole thing is pretty biting, but the "money quote," as we say in the journalism business, is in the first paragraph of the piece. "Paul Ryan's love of Rage Against the Machine is amusing, wrote because he is the embodiment of the machine that our music has been raging against for two decades," wrote Morello. "Charles Manson loved the Beatles but didn't understand them. Governor Chris Christie loves Bruce Springsteen but doesn't understand him. And Paul Ryan is clueless about his favorite band, Rage Against the Machine." Morello's solo music, one track of which comes as a free download from his website with each issue of Orchid, continues the political message, and while it's not impossible to enjoy the music of someone with whom you politically disagree, it is hard to understand how that happens when the music is overtly political in nature. The Springsteen music that Morello alludes to is (mainly) not overtly political, and while Springsteen himself may not embrace governor Christie (I don't know), members of his band certainly do; the governor has been seen socializing with guitarist Steve Van Zandt. Orchid, the first trade for which hit the bookstores recently, explores a world that's survived the wake of a kind of sociopolitical doomsday, where both the physical and political world have been driven to the brink of obliteration by irresponsible human behavior and policy.