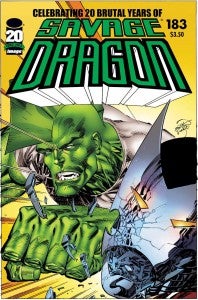 This is it, folks--Savage Dragon. Overlord. Kids looking on. Cops waiting in the wings. A crazy issue that sets the stage for a new storyline and a new status quo for the Dragon family hit the stands earlier today.

Erik Larsen, as usual, joined ComicBook.com to talk about the new issue of Savage Dragon, providing context and commentary for the book. This is a spoiler-filled conversation, though, so if you haven't already, buy the book and read along with us.

We open with Angel leaping into action. It's pretty clear from how well Angel's done fighting the likes of Kurr and Overlord that she really is a powerhouse. Has she reached her physical peak in terms of strength now that she's turned 18?

I would imagine we're getting pretty close to that but I figured it's roughly like it is in sports where athletes tend to get to their physical peak in their early to mid 20's. But for all intents and purposes she is roughly at the height of her physical strength.

It's touching to see just how protective Angel is of her little brother. More than once we've seen her fall into an almost berserker rage when Malcolm has been imperiled.

The two have been through in whole awful lot together over the years and Malcolm is one of the few family members she has left. At that point in the story Savage Dragon is gone and her mother has been dead now for years not to mention her father who was killed when she was a baby. Angel's growing up but she's still clinging to what little fragments there are to her childhood. Malcolm is really the only person in her life who has been there for her the entire time. Savage Dragon has been in and out of her life, her mother has been out for a few years her real fathers been gone for pretty much her entire life. Malcolm is her rock and it's really important to her that he stays alive.

Mal in that panel where Angel is crying over him really kind of looks to me like Dragon in the famous "impalement" shot. Was that echo intentional?

It wasn't. I wasn't looking back at my older issues at that point. If it looks similar it's because I'm in a rut (Erik sobs quietly to himself).

The scene involving Thunder-Head at his father's gravesite is very interesting. It seems we are getting a resurrection of sorts after all, only it's not SkullFace as planned. Is this another Vicious Circle goon on his way back?

Time will tell. As you know I have been very reticent to bring back anybody from the dead in this book. One of the things I pride myself on in Savage Dragon is that death is not a revolving door and that once you're dead you stay dead. This subplot flies in the face of what I have done in the past in many ways because it threatens to reverse that course of action and bring back characters who have died. It's kind of been one of those "he wouldn't really do that would he?" kind of things that I put in motion to test my readers' faith in me. The answer to what happens next will have to wait until later. I don't want to spoil it here.

It seems from the birthday party that Frank Jr has forgiven Angel after last issue's uncertainty. And Tierra visiting Malcolm makes it look like the Dragon kids are still somewhat lucky in love.

Tierra is one of Angel's closest friends so her being there doesn't necessarily mean anything in regard to her getting back together with Malcolm. She's there for Angel.

Daredevil really is fearless! Tackling Overlord again on his own was brave... and stupid. It seems he has a habit of confronting those vastly more powerful than him. Can his luck possibly hold out forever?

We'll see. Daredevil was billed as the "master of courage" when he first appeared and I'm taking that literally. He's fearless.

Daredevil seems to have a million lives--he's always joining the fight, going after guys way over his power level. Is that eventually going to catch up with him?

You know, it really never dawned on me until this issue that Angel has been getting around a bit the last little while. Is her time with Daredevil public knowledge? Obviously it's one thing for Mrs. Darling to suspect...

No, no--but her friends and family were aware that she had a crush on Daredevil at one point even if it didn't make the tabloids.

Dragon's back! And kicking ass! Dragon's swift dealing of Overlord is maybe the most one-sided clash between the two. I guess he's less restraint as he gets older. Was he simply fed up with Overlord? Or is Dragon having to be this quick and brutal for fear of running out of steam in a prolonged fight?

I loved the cover, but was it a struggle deciding whether to use Dragon on the cover when that splash page was such a great reveal?

It's his 20th anniversary issue. I couldn't vey well just leave him off the cover. And that cover gave me more grief than anything in years. I must have drawn ten versions of it. What a struggle.

After a few years we get the Overlord reveal. And it's Flash Mercury?! What made you choose Flash to become the new Overlord?

It seemed like a good idea at the time.

Is this the end of Overlord? The armor didn't appear to be a total wreck. Can it be repaired or is it gone?

I'm thinking it's over. I realize there are those who see Overlord as Dragon's Joker or Lex Luthor but I think it's been pretty much played out and the internet has made sustaining a mystery like this pretty much impossible. This is my third crack at it and I think that's plenty. Besides, with the book shifting over to Malcolm it's time to move on so that he can have his own rogues gallery. It shouldn't all be hand-me-downs from his old man.

Yeah, there is a sense among fans that Overlord is Dragon's Lex Luthor. Is that part of why you wanted him back for this?

It was and it's why this issue had the big reveal.

Can Flash be redeemed? He never wanted to be a villain. He certainly doesn't look like an evil person when in his usual costume.

That's the big question, I suppose. Flash did some things which weren't things he should have during his time in the armor. He killed a few guys. Granted, they were all criminals but nevertheless he did kill them. Can a guy walk away from all that? I dunno. But he's one of a few morally ambiguous characters in the book and that question can be applied to any number of characters.

Dragon recognises Captain Stewart. I would have thought his memories ended at his "death" in issue 147 so he's never met him in person. Is this a clue that Darklord didn't completely separate Virus and Dragon? Is Virus still lurking around the corner? Dragon's consciousness was in the mix in regard to Virus. At least--it was to a point. And Darklord pulled those memories out of Virus so I think it makes sense to some extent to have Dragon have memories of the time when his consciousness was calling the shots. Dragon was very much there when Captain Stewart was introduced. He was there for Daredevil's introduction as well. It's safe to say he knows everything up through issue #150. Beyond that it's bits and pieces.

Will Dragon's arrival in that ship be something that colors the public perception of him now that he's back?

He's got some explaining to do.

How's the Air Force okay with him and it doesn't trickle down to the CPD?

It's just your typical one hand doesn't know what the other is doing scenarios.