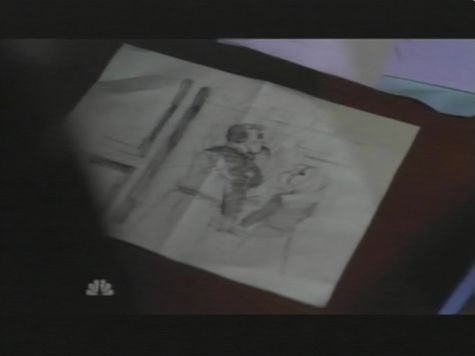 I'd love to say that last night's episode of Heroes, entitled "A Clear and Present Danger" recaptured the classic Season I magic. But it didn't. Oh, don't get me wrong. There were some bright spots: A clearly defined enemy, less characters, and the story didn't span five different periods in time. The producers and writers are getting back on track, for sure, but there are a few more changes I'd like to see. Things that would make this show as good as it was in its initial season. 1. PUNT PARKMAN - This guy has more mood changes than a schizophrenic off his meds. Seriously, one episode he's tough police guy taking charge, and the next he's "Let's be normal". The guy is just a wuss, and he needs a big shot of self esteem. He just takes up space. Until last night, Parkman didn't have a true role in the series. But now, he's the latest Isaac Mendez/Utusu future drawing guy. Woo hoo! Did you see his drawings last night? I realize Parkman said he couldn't sketch, but wow, I know four year olds with better art skills than that. If he doesn't get better--and quickly--the future will continue to happen before they can figure out what his chicken scratch means. Just punt Parkman. Make the show less boring. 2. ADD SOME MORE HUMOR - Saving the world and avoiding being killed is pretty intense for the characters. And the audience. We don't want to finish an episode exhausted. Add some levity. Back in Season I, we not only laughed at/with Hiro, we CHEERED for him. Where has that humor gone? Sure, an attempt was made last night when Hiro was trying to convert Ando into a full-scale superhero, but that didn't take it far enough. Laughs are good. Breaks in the action are GREAT. You chase too much and push the panic button too often, and viewers will push another button--on the remote. 3. HRG NEEDS TO PICK A SIDE - Good, bad. Bad, good. HRG whores himself out more than the collection of women standing outside a Vegas Brothel. He's with the company, he's against the company. He's with the company, he's against Arthur Petrelli. Now he's with Nathan Petrelli? I hope HRG is making some serious coin, because his loyalty (and reputation) is shot. Also, what is the objective, HRG? Tag and bag? Save the world? Kill everyone but Claire? Pick something and stick with it. 4. CUE THE BUFFY FACTOR - Heroes needs to take a hint from the Buffy the Vampire Slayer television series. Start a season, define the bad guy. Build up to a huge climax, then take out the bad guy. We're on Season III and Sylar is STILL the bad guy. They're still hunting him, and it's BORING. Sylar's badness has lost its mojo. It's time to find another bad guy. Let's hope that Nathan Petrelli is that guy. Which leads me to #5. 5. ORDER A HIT ON THE ENTIRE PETRELLI FAMILY - Gasp! What did I say? That's right, it's time to kill off Peter "I'll stop you" Petrelli. Peter says the SAME THINGS over and over every episode. He's going to stop the bad guys, no matter who they are. He's overly dramatic, and it's just, well, overplayed. Nathan's character has zero appeal, either as a good or a bad guy. He's not intimidating. Don't you just get the feeling that if Nathan's character smarted off to you that you'd just knock him upside his head and tell him to shut it? That isn't the kind of fear you need from a bad guy. Now ARTHUR Petrelli would scare you out of your pants, but they already knocked him off. Lastly, please get rid of Angela "I belong on Guiding Light" Petrelli. Between the poor acting and the never-being-shocked feeling when we find out she's pulling the strings, we just don't give a crap about her. Show Angela the door for good.

Paging Heroes - Clean Up On Aisle 5!