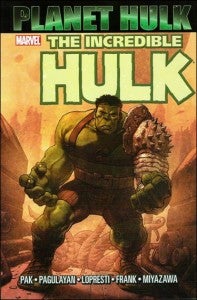 Massive spoilers ahead for any number of upcoming Marvel Studios movies.

In a video journal (embedded below) filmed across the street from Marvel's New York offices, Latino Review's El Mayimbe asked, “What about The Hulk? Where does he fit into Marvel's Phase Two and Phase Three plans?”

He reiterated Marvel honcho Kevin Feige's comments, made last year, that such a thing couldn't happen until at least after Avengers 2.

And then he had answers.

While Latino Review doesn't name names, it suggests that the Marvel Cinematic Universe's version of The Illuminati decide to ship the jade giant off-planet following the events of Avengers 2 "either in the third act or during the post-credits sequence, deeming him too dangerous to remain on the planet. Following those events, a version of Greg Pak's Planet Hulk will see him "smashing puny aliens" on a planet where he's forced into gladiatorial combat and becomes a Spartacus figure.

In the comics, of course, the Illuminati features characters that Marvel Studios doesn't currently own (Reed Richards) as well as characters who haven't yet been introduced (Black Bolt, Dr. Strange, Black Panther). The fact that those characters are the same ones whose movies Stan Lee recently said were moving forward at Marvel may corroborate this report.

"When [Mark] Ruffalo signed his six-picture deal with Marvel, like the rest of the big names, part of the lure was the chance to star in his own franchise--and cross over into others for years to come," says the report. "Mark Ruffalo didn't sign on the dotted line to be some third or fourth banana in The Avengers no matter how dope the part was."

He adds that, according to his sources, Avengers 3 will be loosely based on World War Hulk, wherein--after the Illuminati sent him into space and the events of Planet Hulk played out--Hulk returned to Earth and effectively went to war with Marvel's superhero community.

That would seem to scuttle long-simmering rumors that Avengers 3 could be a version of Civil War.

These are, of course, rumors and Latino Review has been wrong from time to time in the past--but they've also brought some very accurate Marvel scoop to the table--so accurate, in fact, that Marvel Studios began an internal investigation into leaks surrounding the company's Comic-Con plans last summer.