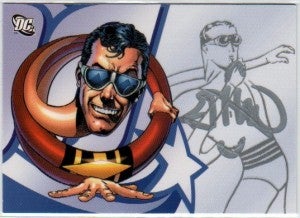 Ethan Van Sciver, at a Phoenix Comic-Con panel this weekend, reportedly showed off some art that reveals his upcoming "top-secret" collaboration with Gail Simone will be a 100-page horror book featuring a redesigned Plastic Man, according to The Outhouse. Bleeding Cool reports that the book is being tentatively titled Bedlam. The site reports that Van Sciver told the audience that the character he was working on was a "lame and embarrassing Silver Age character," and that the book would take place outside of the New 52 main line. Whether that means the story will be non-canonical, or just that it won't be one of the 52 ongoing monthly titles, is unclear. Urged on by the crowd, apparently Van Sciver showed the redesign to a speechless moderator at the panel. While Plastic Man has only appeared once--in the background of Justice League International #1 on a monitor--since the DC relaunch last September, he had not been substantially re-envisioned when he did. If the Simone/Van Sciver story turns out to be taking place in the world of the New 52, it may require a brief explanation as to what happened to alter his appearance, or that single-panel appearance may just be ignored. Other characters who appeared briefly in that same issue have also not yet appeared in the new DC Universe, including Metamorpho. Simone and Van Sciver last worked together on The Fury of Firestorm: The Nuclear Men, a New 52 relaunch of the popular Silver Age character that was met with middling reviews. Simone left the title--which the pair were co-plotting together--after six issues, reportedly after conflicts with DC editorial over the book. If those rumors are true, the concerns didn't affect Simone's work on the best-selling Batgirl relaunch, or apparently her relationship with Van Sciver.