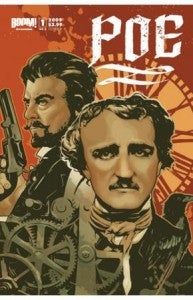 As someone who has been a student of literature practically all his life, I must confess that I approached reading Boom! Studios' Poe #1 with high expectations, intense curiosity and crossed fingers, hoping that it would be a fitting representation of one of America's greatest authors, one who received so little acclaim, critical or financial, in his lifetime. With this new and fascinating series, Boom! and writer J. Barton Mitchell are breathing new and respectable life into a man who was plagued by so many demons during his lifetime. Immediately, issue one of Poe establishes a protagonist in Edgar unlike most others in comics. Living in an institution for his mental instability following the death of his beloved wife Virginia, Poe finds himself having to face down a sea of personal demons, all the while visiting his wife's grave at night, much to the frustration of his caregivers at the asylum. His policeman brother William comes to collect the dispirited Edgar after he is asked to leave his housing by the very nurses he has vexed so. Along the way home Edgar and William find themselves on the scene of a murder, and it is here where Edgar, and the series, begin to shine and prove their value. In short order, Poe is able to give the policemen assembled around this now third murder vital clues and next steps in how to approach tracking down this killer. What becomes readily apparent, and what Mitchell has done so well, is to show Poe at his true genius, a man who can see through the cloud of his despair and mania and prove his intellect to the world. Renewed with a sense of purpose, and for the time being not plagued by thoughts of Virginia, Poe and his skeptical yet devoted brother team up to take on the case and find a pattern in the clues. The issue ends with their adventure getting more and more supernatural and monstrous in nature, leaving readers with great expectations of future adventures. Fans of Poe's work will see several references to both his poetry and his prose, and there is a very nice nod in this issue to Poe being the father of the modern detective story. There are certainly a few liberties taken with some of the events and experiences in Poe's life, but that should not deter his fans and readers; rather they should look at the enrichment this adds to the narrative of the issue, and I think Poe himself would approve of this treatment. The human element of Poe's life is what is so well-represented here, and the sense that full public acceptance was close but a wary public, illustrated handsomely here by Dean Kotz, are unsure what to feel about a man who sees clues in clock faces and claims to see spirits and visions of death. This issue is certainly one that can be read again and again, by fans of Poe's work and the unfamiliar, because a Poe showed us in his own work, a good story is always a good story.