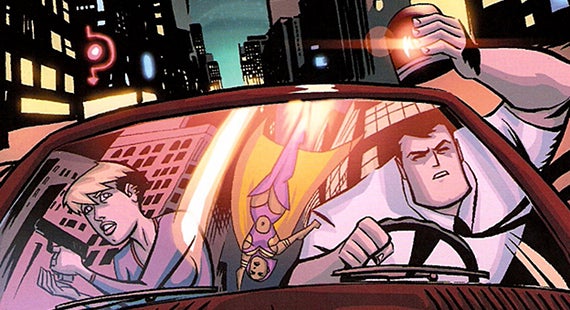 As part of Sony's wide-reaching presentation at E3 (the Electronic Entertainment Expo) today, the electronics giant revealed some of the first information about their upcoming adaptation of Brian Michael Bendis and Michael Avon Oeming's long-running, creator-owned comic Powers.

The adaptation, the third attempt to bring Powers to the small screen, will debut in December and is apparently already in production, although at this point, nobody seems to know who will star in it. Trying to find details about the new, Sony-led version of the series on IMDb leads back to the page for the already-filmed pilot with Jason Patric. Given his enthusiasm for that pilot at the time, it's possible that the comic's creator and series Executive Producer Brian Michael Bendis convinced the studio to retain much of the previous cast, but that seems unlikely.

The first episode will be free to everyone on a PS4, and subscribers to Sony's PlayStation Network Plus will get the entire series for free.

"[The series is] going to show us what a world with people with powers would look like," said Bendis. "I know that as gamers and comic book lovers, we love our genres hardcore. One of my jobs as exec producer of the show is to make sure that the TV show gives us what the comic book gave us, with all the authenticity we can muster."

You can check out his brief presentation below.