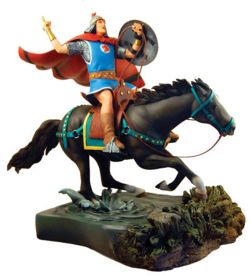 Hal Foster created Prince Valiant as a story set in the days of King Arthur. Prince Valiant was a Nordic prince, who went to Camelot and befriended Merlin, King Arthur, and his fellow knights. Prince Valiant began as a full tabloid page in newspapers way back in 1937, and the adventure has continued to run weekly in newspapers since then. Hal Foster passed away in 1982, but other artists have continued the story. The current illustrator of Prince Valiant is Gary Gianni. ReelArt Studios is producing a collectible statue of Prince Valiant, and the sculpture is based on one of Hal Foster's most iconic panels. The sculpture shows Prince Valiant in full gallop, waving an unsheathed sword aside a lunging charger. Mike Richardson, who is president of Dark Horse, said, "Wow! They picked a tough assignment and really nailed it. This is one of the best Prince Valiant items ever, and that is coming from a tough critic who owns almost everything that's ever been done." The Prince Valiant statue is limited to only five hundred hand-numbered, prepainted pieces and is scheduled for a December 2008 release.