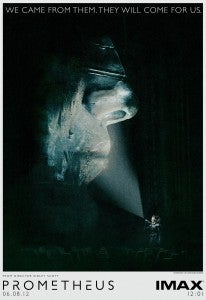 Snow White and the Huntsman

brought in $1.38 million at midnight shows last night, just under the $1.55 million that Men in Black 3 made at similar shows last week. Current estimates have the film lined up to gross $39 million this weekend, with some experts predicting it could ride as high as $50 million if things break their way. It's worth noting that the per-screen average for Snow White and the Huntsman is nearly twice that of Men in Black 3, since the Will Smith vehicle opened on more than twice as many screens (2,232) as this week's presumptive #1 (1,092).

Men in Black 3 is still expected to come in second this weekend in spite of a fairly soft opening last week, with The Avengers poised to take the #3 spot. The films are expected to bring in $26 million and $21 million, respectively, which means that if The Avengers exceeds expectations and Men in Black 3 fails to meet them--as happened last week--it's possible those numbers could flip.

Prometheus, meanwhile, has begun its official overseas release. While we won't get the movie here in the U.S. for another week, it opened in France yesterday to a $1.5 million midnight screening tally, the second-highest French bow of the year behind The Avengers (#3 and #4 were Men in Black 3 and The Hunger Games, respectively).

All of this comes against a backdrop where it's expected that June will be a big month--Snow White & The Huntsman, Prometheus and other potential blockbusters are opening all the way up until the last weekend sees Ted bow. Meanwhile, Box Office Mojo reports that The Avengers has set a record for the highest month-long marketshare ever in the U.S. theatrical market. 52% of all money spent at the box office in May went to The Avengers, easily toppling the previous record of 37% set by Spider-Man in 2002.