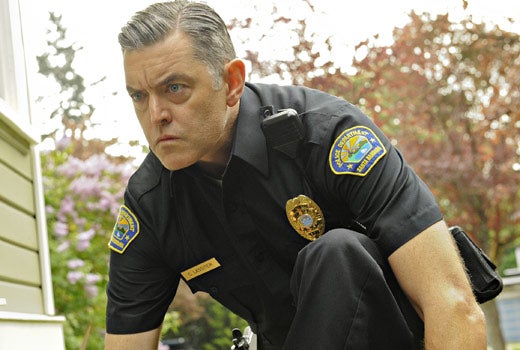 Finally picking up on the events of last year's season finale (we've had a musical episode and a theme episode in the last month, so it seems like it's been a long while since the Chief was suspended, Lassiter was demoted and Psych stopped being hired), the episode opens with Anthony Michael Hall's Harris Trout rallying the troops in front of police headquarters. Fun fact: Hall is the fifth principal cast member of John Hughes's The Breakfast Club to appear on Psych. The film featured only seven named characters, and all of them except for Emilio Estevez and Paul Gleason have appeared on the show. Gleason passed away on May 27, 2006, about six weeks before Psych debuted on USA. When I spoke with him in 2010, series star James Roday said that the show would likely never be able to get Estevez. "We sort of had a wish list of people that we want to have on the show that we've been checking names off of for the last four years," said Roday. "Getting the entire Breakfast Club is, I think, un-doable, but it's still up there as one of the goals. I think that having Molly on is probably going to happen; I think with a little finesse and arm-twisting we can probably get Anthony Michael Hall to do something fun. But I think getting Emilio is going to be what keeps it from happening. He just doesn't really act much anymore. I think he's going to be the one that got away." 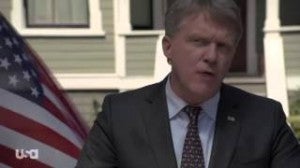 When he asks for his head detective, Juliet steps up. Making their way to a crime scene, Shawn and Gus convince one of the locals to attempt to get past the barrier in order to get them near enough to the evidence for Shawn to do his thing. While placing the man under arrest for interfering with the investigation, Lassiter sees their suspect attempting to sneak out of the area around the corner of a house. He tackles and arrests the man before Trout can finish his speech. Cut to days later, when Trout is holding a press conference bragging about Lassiter's success; someone tries to shoot him, but Lassiter tackles him to the ground. A white van pulls away from the scene. Shawn and Gus head to the police department, where they're sneaking around so as not to be seen by Trout when they approach Lassiter; Shawn offers to help him as a "life coach," his next get-rich-quick scheme now that Psych is struggling without the income from the police department. They convince Lassiter to step up and rally the troops, since Juliet is not doing it as well as she could (she feels guilty about taking Lassiter's job). He goes and makes an awkward-but-rousing speech, then leaves the station. 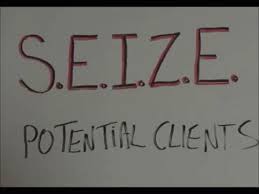 After that, he heads home to see Marlowe. He tells her all about his speech, during which she interrupts to tell him taht she's pregnant. Later, sitting in his car and looking at a sonogram photo, Lassiter sees a white van drive by and pulls it over. Dialogue reveals this is the fourth white van he's pulled over in an hour, but before he can make it to the door to check on the driver, he sees someone walking by with a stroller and starts to have a brakdown. He calls for backup, and O'Hara comes personally. When she arrives, Lassiter is crouched and hiding behind his car. When it turns out to be a family headed to school, he's embarrassed. Back in Trout's office, he tells Lassiter that if he brings in the gunman without dying, he will review Lassiter's file to give him his job back. While Shawn and Gus are back at Psych, Lassiter comes to them for help with the case, telling them that he isn't physically capable of doing it on his own anymore. In a binder full of death threats directed at Trout, Shawn finds a batch of threats all dated exactly one year apart each. They head off to see the suspect, and when they see that she's got the same caliber of gun that the suspect had, Shawn tells Lassiter and Gus that it's Trout's mother.

She apparently sends a threatening letter to him every year on his birthday. When they tell her what the problem is, she tells them that you know it isn't her, because she would have missed. They take her in to interrogation anyway. Lassiter goes into Trout's office to tell him that his mother is in custody, but loses his nerve.  Shawn sends him back in, and Trout says he wants first crack at her. He goes in and gets into an argument with her immediately. O'Hara comes to tell them that there was another white van drive-by, and she wants Lassiter's help in the investigation. At the hospital, they visit the latest shooting victim, who's just as repulsive and unlikable as Trout. Shawn thinks the killer is specifically targeting "a-holes," and calls his father to warn him. 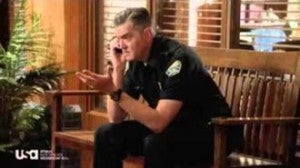 Trout, of course, likes the victim and brings Lassiter the possessions taken from the man's car out of evidence and tells him to return them to the man at his office. When he gets there, he sees what he thinks is the same white van in the parking lot and has a breakdown. Shawn and Gus show up and bring him to the van in spite of his state of panic. They hear a noise inside the building and Shawn and Gus go in to investigate while Lassiter stays behind to watch the van. Shawn and Gus become convinced that Lassiter is sick and dying, but before they can process it, they have to go investigate more noises in the dark. A hooded figure takes a few shots at them and then, upon heading out to the van, points the gun at Lassiter but it's empty. Lassiter nevertheless panics, and the suspect runs off. When they head back into the office, though, the victim has already been murdered. As it turns out, he was dead by the time they got there, but Trout is still angry. He confiscates Lassiter's ticket book and pens. O'Hara comes to report that nobody has seen the van's owner for days. They're going to go to his workplace to look for him, and she wants to bring Lassiter. Shawn tells her that they believe Lassiter is dying, and she goes to invite him to help her investigate at the fish market where their suspect works. When they go to the fish market, the suspect's co-workers all hate him and say he was an awful person. Shawn sees the suspect's--Tony Delphin's--glasses from his photo in a tub of food waste, and tells the police to go check it; there, they find his body buried in fish guts. Shawn and Gus remind Juliet that their suspects are all jerks. Shawn sees a logo on a building and remembers it from the shirt of the man he'd inadvertently gotten arrested at the beginning of the episode; they go to his house and talk to his wife, who says the man was always being bullied by jerks and never sticking up for himself. She said she can't be married to, and have kids with, someone who's afraid of his own shadow--and as she's saying that, Lassiter sees her husband sneaking into the house where he'd previously tackled the suspect across the street. He tears out of there after the suspect, and Shawn sees him through the window entering the crime scene house. Lassiter is working his way through the house with his gun drawn when the rest of the group follows him over. Lassiter, seeing the man, drops his gun; Patrick (the suspect) isn't armed yet, but has a pistol on the counter.  They have a brief standoff that ends with Lassiter fully getting his personality back and rolling into position with his gun to arrest Patrick. During the standoff, Lassiter had admitted he was going to have a kid, so Shawn and Juliet know he's not dying anymore, and everyone has a brief celebration dance. Back at the station, Lassiter goes into Trout's office, and Trout congratulates him on his job well done. To "reward" him, Trout tells Lassiter that he's being promoted to his personal driver. Later, Lassiter is in Henry's truck getting parenting advice. He tells him that there will always be bad guys to chase, but that your kid only grows up once and it's important to be an attentive parent. After having had that conversation, Lassiter tickets Henry for a broken tail light.