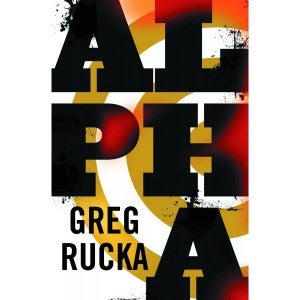 Last week, ComicBook.com talked to Greg Rucka on a variety of topics. While the first portion of the interview--about the comics and film industries and their treatment of women both behind the scenes and in their content--ran on Friday, the interview itself was meant  to discuss his forthcoming novel, Alpha.

The first in a series of stories following an aging Delta Force soldier named Jad Bell, Alpha sees Bell swept back into action when terrorists target an amusement park, putting the lives of thousands at risk. Stolen away from his retreat in Skagway, Alaska, just as he's beginning to get comfortable, Bell finds himself at the center of an adventure with twinges of the bizarre and comical, but one that carries deadly serious consequences.

Rucka spoke with us about Alpha, which will be released tomorrow from Mulholland Books. Because the interview went far afield of Alpha, check back later today for a Panel Discussions podcast featuring the complete conversation, of which this is an abridged portion.

Well, why don’t we talk a little bit about Alpha? I like the book, and it seems to me that it’s built for that very reductive review of, “Try this if you like Jack Reacher.”

Lee [Child, author of the Jack Reacher series of novels] said some very nice things about the last novel as well, and that’s lovely, for which I’m thankful. It’s weird—Alpha is sort of the logical extension of a lot of the character work and a lot of the research I’ve been doing. I was answering some e-mail questions from a bookstore in Austin, Texas, called Book People in advance of me coming down for the tour, and they asked where the character came from, Jad Bell, what was his genesis—and I realized the answer was that a huge part of his creation comes out of working on Batwoman, actually, and a lot of the research that I did on those scripts in particular about Kate’s training, her background, her history and in particular looking into her dad and sort of reading up on, and trying to separate the lies from the truth in all the literature out there about Delta Force and so on.

One of the things that I like about Jad is that Atticus [Kodiak, one of Rucka’s other recurring characters] started very young. For the novels most of my protagonists tend to mirror my age at any given time so Atticus was quite young when I started that series and time and age is always an issue in any serialized work—this is the question as to how old is Superman at any given moment, when X thing happen in the story, how many Christmases have there been.

Lawrence Block has been writing Scudder for many years now and Matt just keeps getting older, and I think that’s just incredibly brave and not a terribly easy thing for him to do, writing wise. Atticus is locked now somewhere in his mid-to-late ‘30s; [Tara] Chace [from Queen & Country] is similarly locked in her mid-‘30s and should we come back to her she’ll probably be in her late ‘30s, early ‘40s but Jad was very much, I wanted a guy at a different point in his life. I wanted him at that outside edge of his kind of operational lifetime, his age is a little high for being an operator, and I wanted to take and sort of juxtapose that fascination that I kind of developed when I was working on Batwoman with that call to service idea—that Kate wants to be a soldier, she wants to serve, and when she’s denied that, turns to this other form of service in that costume.

So it isn’t simply patriotism and serving the flag; it is service to something higher and something larger. But that is not to say that everybody who does it is constantly going on about their higher calling and duty and so on. I wanted to juxtapose that sense of service with the fact that it is also a job and I wanted to take a guy who really is absolutely professional and yet I think entirely human....

[There’s a scene with a cobra in Alpha] which is one of the most over-the-top, silly things that I think I’ve ever written, and was delightful and fit and made sense at the time, you know? It worked in the moment. I like that you’ve got a guy who can do that but also a guy who completely fails at communicating with his daughter, you know? Her deafness being a metaphor for all of his other flaws, I guess. So it was a chance to play in a whole bunch of different arenas and to sort of explore a new character. It is of a genre, of the military-action-thriller genre, but at the same time I think it’s rather subversive. It is in the genre but it’s also a little—there’s a little bit of satire running through Alpha, I think.

And there’s a bit of the Unforgiven feel to it, too, where he’s kind of saying, “You know, I’m not sure I want to keep shooting people for the rest of my life.”

Yeah, I’ve shot a lot of people. There’s a bit at the beginning of Bravo, where he and Chaindragger and another guy Steel River are taking a house, and they’re trying to take this particular target alive and when they reach the target the guy has a gun and is bringing it around. And so they have to obviously keep him from shooting them, and so the gentlemen is shot in the hip. They basically shatter his hip, which is going to be extraordinarily painful as far as non-fatal wounds go. And there’s a scene there where Bell is moving along and the guy is on the ground trying not to make noise and failing. And the line is something like, “Bell, who has been shot four times before, understands the problem.” It’s like, “This hurts!” And I think I wanted that, too. I wanted that tactile sense because there’s an element of Alpha that’s absurd—it’s at an amusement park, people are running around in costumes and so on. So it was important to me to ground the physicality of it and to make the people as real as possible even if the setting seemed more implausible I suppose. But frankly I don’t think it’s implausible at all. I think what I describe is not the way it would go down—but talk about locations with great big, shiny targets on them.

You’re working on Punisher these days, so you’ve got to be careful what you say about those guys.

You know, I’ve got a couple of people I tend to go to and talk to for research and we’ll have these conversations about, like, “Where would you plant this bomb?” And you get sort of a pause and the guy I’m talking to would say, “We’re just going to wait for the NSA to clear the threat now.” No, at this point they surely have to go, “Oh, it’s Rucka again.”

What are the big differences between writing these ongoing stories for these characters in your novels as opposed to comics?

I think honestly it comes from a gaming background—I write campaigns, for lack of a better way to put it. I don’t know, I tend to create characters that I want to spend time with. I think you can hear it when I talk about Jad. I want to spend time with Jad—I want to spend time with Chaindragger and Bonebreaker and Cardboard and the whole crew there and explore them. You see it a lot in Gabriel, too. And that’s—more than anything else, I think—the thing that drives the serial work, be it in comics or in novels. With novels you want the story to be enclosed, you want it ot reach an end and a clear end but at the same time I find it dissatisfying to reach the end of the story and presume that’s everything you needed to know. It’s a great way to tell a story, I’m not knocking it, but I want to do more. I think that tends to be the thing that pushes it—I’m looking for where do they go next. Invariably I’ll be halfway through a novel and I’ll go “Ooh! This has to be the thing that happens next!”

Just before we wander back into comics—is this right, that Alpha is the first book from your new publisher?

Yeah. Mulholland is an imprint of Little, Brown which is part of Hachette, and Alpha is the first of three. We’re hoping to have Bravo out next summer and then Charlie out the summer after that, though Charlie’s title may change.  Because Alpha and Bravo work as titles but Charlie sounds like it’s about a guy named Charlie and does not quite reek of the action-adventure, so there has been some discussion of jumping C altogether and moving to Delta which, ironically, might work.

But then you can always allude back to something we missed.

Yeah, exactly. It’s been great; I had a wonderful editor in John Schoenfelder on this first book. Got a new editor now that John’s left on the second book; Mulholland has been terrific at every turn, I’m just so happy. And they’ve also been collecting comic book people; Warren [Ellis] has been doing Gun Machine for them, and I believe they’ve been flirting with some other people that I don’t know if I’m allowed to talk about.

[Editor’s Note: The critical reader copy of Alpha contains a back-page ad for the publisher’s other books, including two by Birds of Prey’s Duane Swierczynski and one by Joe R. Lansdale of Jonah Hex fame.]