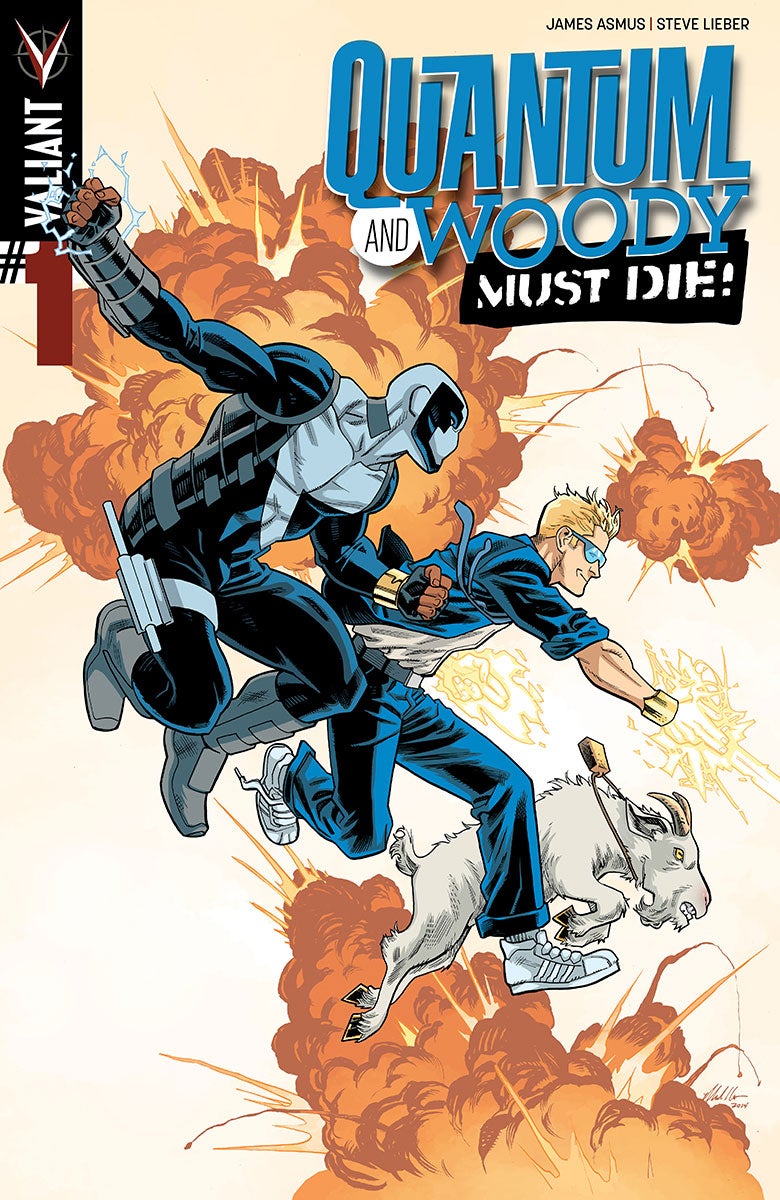 Note: The first draft of this story incorrectly identified writer James Asmus as Fred Van Lente, his co-writer on The Delinquents. We apologize for the error.

The Valiant Entertainment duo of Quantum and Woody returned to comics stands almost two years ago in their own series helmed by James Asmus and Tom Fowler. Quantum and Woody was just another example as to why any fans of the superhero genre not reading Valiant comics were missing out in a big way. It is equal parts comedy and action showcase featuring a superpowered Goofus (Woody) and Gallant (Quantum), adoptive brothers who must klang together their wristbands every 24 hours or face atomic dissolution. James Asmus and Steve Lieber are providing a new jumping on point for readers who missed out the first time in the form of Quantum and Woody Must Die #1.

Lieber showed off some serious comedic chops in the recently cancelled Superior Foes of Spider-Man (a series we have praised at ComicBook.Com many, many, many times). That skill is applied very well here. His instincts for blending superheroics and comedy are perfect. Every sequence he draws is capable of transitioning between light hearted banter and high octane smackdowns faster than Woody can make a bad decision (i.e. very quickly). He understands that action and humor are two sides of the same coin, both relying on set ups, punchlines, timing, and clear visual storytelling. The ability to nimbly navigate between the two and present both so well reveals the finely honed skills of a consummate craftsman.

There are ample sight gags in Quantum and Woody #1, allowing Lieber's images to tell the jokes almost as often as Asmus's words. Whether it's the delightful use of poop emojis or the smattered scribblings of a truly demented therapist, these pages contain plenty of laughs for observant readers. Lieber continues to use thought bubbles in creative fashions. He fashions an excellent Santa-based punchline which also includes a Peanuts reference that is an absolute treat.

Dave McCaig backs Lieber up with some excellent coloring. The costumes and palettes for the duo remain consistent, but there are a few opportunities to experiment that McCaig takes full advantage of. Chemical concoctions and mad science abound in Quantum and Woody Must Die #1, and the neon rainbow effects match perfectly with this wacky take on science gone awry.

Longtime fans of the series will have no trouble recognizing the duo or the fast pacing of their adventures. He understands that it's important to keep this story on the move and doesn't allow readers much of a chance to breathe between laughs and explosions.

The first issue is a little bumpy jumping between some early scenes without a clear connection. The opening action sequence and subsequent therapist and doctor's appointments follow no clear time frame and lack a causational link. Without that link the momentum between each narrative beat is lost. The necessity of these moments becomes apparent by the end of the issue, but they feel disjointed upon an initial read.

Quantum and Woody Must Die #1 is a great introduction to one of the funniest superhero comics being published today. It features a creative team who know how to tell a joke both with words and images, and they take full advantage of the delightful sandbox that is Valiant. For anyone who missed out on Quantum and Woody #1 two years ago, make sure to take advantage of this second chance.

Quantum and Woody Must Die #1: Why Is This Series Only Four Issues?