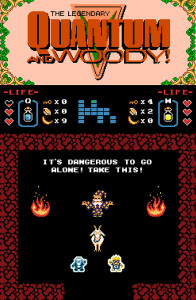 Recently, ComicBook.com sat down with a number of Valiant creators at San Diego Comic Con International; you can read our interview with X-O Manowar writer Robert Venditti here, and see a teaser of tomorrow morning's conversation with Harbinger's Joshua Dysart here.

But what about Quantum & Woody, you ask?

Well, we're holding off on that interview until the second issue of the series is released next Wednesday, but we will give you this little snippet because, like us, some people probably wondered about a particular character's lack-of-an-appearance in the first issue...

Asmus: So--yes. I think it's especially funny when someone pointed out that of the four [variant] covers for issue one, they all had the goat on them. One of them had only the goat on them. I guess you could say Quantum and Woody are in the title.

In the original series, the goat didn't come in until issue three or issue four but quickly became such a defining element of the book. I still think it's a really brilliant element to give people a sense of what kind of book it is. When you say "One of the main characters is a goat," it gets you a lot closer to understanding it in a fast way.

So yeah--that was another thing where I didn't want to rush it. I know it's something people are really excited for but for me, hopefully that will on the cynical side keep some people who are on the fence around until the goat shows up. I'm very forthcoming about issue four--the goat makes his presence known in a really big way. We at least jump right into the deep end once he's there.

You heard the man, folks! Stick around for the goat!