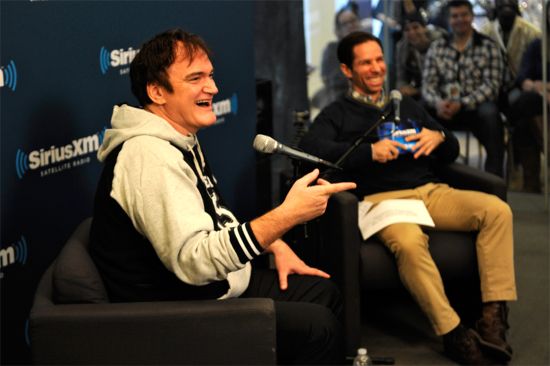 During a recent Q&A session with SiriusXM listeners, director Quentin Tarantino talked about Django Unchained and more.  Comicbook.com has some photos, video, and a transcript of part of the event.

In regards to the character Django, Tarantino said, “Django was so popular that about 40 films exist that are basically non-related, rip-off sequels to [the original] Django.  And rarely do they actually try to make it the same character.  Only a couple of them have ever tried to do that.  It’s just a character name Django. Sometimes the movies don’t even have a character named Django in it. They just put ‘Django’  in the title because they…[thought] that’s what spaghetti western people would want to see.  Not to mention any time...[a]…Franco Nero movie—who was the star of [director Sergio Corbucci’s] Django—in particular played in Germany, it was always called ‘Django’ something.  Didn’t matter what it was. If he’s doing a modern day cop film in the ‘70s, it was Django the Cop. If he’s doing a movie where he plays a shark hunter [it would be called] Django and the Shark…Django in Vietnam. There were all these complete rip-offs, unrelated sequels to Django and I am proud to say, that my film, Django Unchained, can join the long line of unrelated Django rip-offs.”

Comparing his Django to the other Django, Tarantino said, “In the case of Django, this movie became such a sensation; it took spaghetti westerns to a different place- a much more violent place, a much rougher, more brutal and even more surreal type of West.

And just as an example of how violent the movie was at the time, it was banned in England up until the ‘90s. You could not show Django in England up until the ‘90s.  In fact, one of the only ways to ever see Django in England is in the [Jimmy Cliff] movie The Harder They Come. Jimmy Cliff goes to a theater and watches Django and you see him in the theater watching Django and you see the villain Django on the screen,  and they play a whole mirror aspect of Jimmy Cliff as Django…he’s the outlaw on the run.  And that was the only time you could ever see Django on the screens of England—[in] the little clip of it that was in The Harder They Come.”

Mario Bava became one of the first directors that I got to know by name because I saw Black Sabbath on late night television and would look forward to seeing it pop up again.  He’s a great Italian horror filmmaker. And then I started noticing other movies in the TV Guide that had his name and they all had this big, cool operatic quality about them.

And I have to say, it was both…Sergio Leone and Mario Bava that got me thinking in terms of ‘shots’ as opposed to just, ‘This guy did a movie I like. I’ll see another movie that that guy does ‘cause I like that movie,’ as opposed to just recognizing the name and hoping that another good movie would come out, I actually started recognizing a cinematic style and a signature and a quality in the movies that was just beyond a good movie versus another good movie or, a not-so-good one. Even when I would see a Mario Bava movie I didn’t like I still recognized the style and the same operatic quality.

So when I watched Abbott and Costello Meet Frankenstein it bended my mind about the fact that my two favorite genres- even though I didn’t know what the word ‘genre’ meant- could be put into one movie.  I didn’t know that you could do that. I always thought there’s this type of movie and that kind of movie. Like chocolate and peanut butter…but the fact that I was a little boy at seven or eight- or maybe even younger- making genre distinctions not knowing that because I literally thought, ‘Wow this is the greatest movie ever—my two favorite types of movies in one.  When it’s scary it’s really scary and when it’s funny it’s really funny. And I guess I’ve been trying to do that, a lot, the whole rest of my career.”

In regards to the advice Terry Gilliam gave him before he made his first film Reservoir Dogs, Tarantino said, “Before I did my first movie I went to the Sundance Institute. You’re there for a few weeks and…new directors or actors or writers that are professionals come in and they kind of mentor you…one of the people they assigned me…was Terry Gilliam…[who was] at the height of his visionary reputation.  And he really liked the script for Reservoir Dogs. He thought it was really cool. So he was really invigorated with the idea of helping me on the project.

I had never made a movie before. I have all these cool visuals in my mind and I think I can make a great movie but it is all theory until you do it.

And I asked him: '…you have a vision and that specific vision is in each of your movies—how do you capture that?’