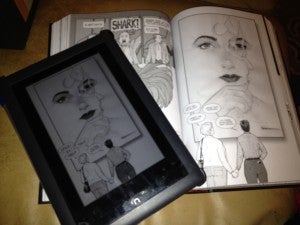 Warning: Spoilers ahead for Rachel Rising #17, out today. The shared universe that Terry Moore's characters exist in got a little closer-knit today, as Johnny and Carol were revealed to have appeared in an issue of Moore's Strangers in Paradise nearly a decade ago. Strangers in Paradise #65 from April 2004, to be exact. In the issue, Katina Choovanski (Katchoo) holds one of her first major gallery shows, and among the numerous splash pages of people responding to her art, or simply captioned looks at her paintings, you get the page seen at right (in the book), which was copied over again in this week's issue of Rachel Rising (#17, inset on the Nook). What's it doing in Rachel Rising? Those women holding hands in the Strangers in Paradise sequence are Rachel's Aunt Johnny and her partner Carol. 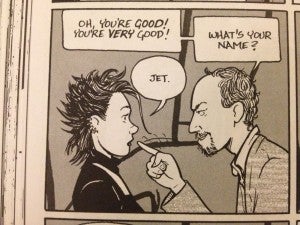 You think that's something? Check the image at left out. That's Jet. Yeah, that Jet. Talking to Freddie Femur at that same gallery show. What's Jet's takeaway from this experience? As she tells Johnny, Carol and Rachel in this week's issue: "I loved working at that gallery. It was so cool of you guys to visit me there....[Katchoo is] so good. She was a complete lunatic, though." Yeah, I can see how you'd get that impression from Katchoo if you weren't the reader. What's going to really tantalize some people, though, is what Johnny and Carol say. "This artist has a gallery in Santa Fe now." "Oh really. We should visit it sometime." We'll have to ask Terry Moore what's meant by that remark...more on that later this week. And don't forget that there's a connection between Rachel Rising and Echo...!

Rachel Rising Characters Were Secretly in Strangers in Paradise

Kevin Smith Releases Another Clerks 3 Image Counting Down to Trailer