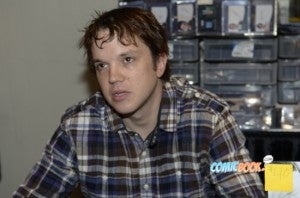 At the New York Comic Con earlier this month, ComicBook.com caught up with Eric Millegan. Millegan is an accomplished actor on television and stage, but is best known to fans--and especially to the convention crowd--as Dr. Zack Addy from the hit Fox series Bones. Millegan was a fan-favorite character on that series--brilliant, socially awkward and intensely likable, the actor made Addy relatable, likable and half of one of the best non-romantic relationships on TV (with T.J. Thyne's Jack Hodgins). As a character who didn't always know what to say, Millegan mastered the art of using timing and sparse dialogue to his advantage, turning silence into a powerful tool and making his occasional monologues and pseudo-scientific explanations even more effective. After he left, the chemistry on the show has never quite been the same, with showrunners and writers strugging to fill the hole left by his character's departure with a rotating cast of recurring characters rather than attempt to replace Millegan with a new series regular in the role. With Bones seemingly nearing its end in the next couple of years, a number of fans came up to Millegan at the show lamenting the loss of his character (who was written out of the show in 2008 and has returned infrequently since) and asked whether he might be return someday in the future. "That would be cool" was his stock answer to most fans, indicating that he either didn't know of any such plans or at least was playing them close to the vest. 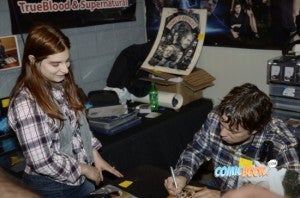 Millegan's character was written out in one of the show's more divisive plot twists--revealed to have been the secret apprentice to a cannibalistic serial killer, Addy was arrested for murder after injuring himself in a well-intentioned attempt to destroy evidence without hurting anyone else in the lab. He confessed and was sentenced to a psychiatric ward, only to return in a later episode and reveal that, while he did help the killer, he never killed anyone himself. Most fans have expected his comeback for a while, and it's hard to imagine the show going off the air without at least one more visit from Addy, whose most recent appearance involved him breaking out of the asylum to provide assistance to the forensic team at the heart of the series. Millegan gave us a few minutes during a signing appearance on the show floor to talk about his character, his craft and what's next for one of the most conspicuously-absent television actors in recent years. You're best known for television, but have taken a bit of a sabbatical since you left Bones to work mostly in theater. I haven't seen you in a feature film--did I miss one? I've done two movies. One of them never came out but my main movie I did was a movie called On Line. It was a small, independent film but we played at Sundance and the Berlin Film Festival. It ultimately was released in 2003. It's on DVD and I highly recommend it. It's a good movie--a little racy, it's not for children--but I think it's really sweet, but definitely an adult film. You can get it at Amazon. 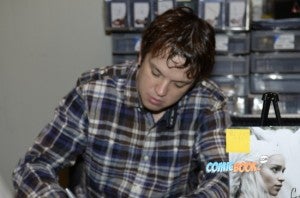 Now, what brings you to the New York Comic Con? You're purportedly a pretty laid-back guy and this is...well, an insane environment. It is! I came here because my friend Marco owns the company [where I'm signing] and he asked if I would be willing to do it. I said, "Absolutely! It'd be fun." I just did a convention in Paris, so I'm just getting--this whole convention thing is new to me. Even though I lived in L.A. for years, I never went to Comic-Con in San Diego, so this is fun. I like meeting fans. Wasn't there a Bones episode that was at Comic-Con? There was a Bones episode at Comic-Con? Was I in that episode? There was a comic book episode, in which Zach got really into comic books, but I'm not sure I was in that one. Now, obviously you're best known for Bones. That became a very interesting character over time, didn't it? He did a lot. A lot happened to him. Well, and you did a lot of growing as a character--then even once they wrote you out of the show, your return was a Hannibal Lecter thing, helping them find Buffalo Bill. Was that a very different challenge, playing from the other side of the table a bit? Yes, and I welcomed that challenge. One of my favorite episodes to shoot was the episode in which you find out that I'm the Apprentice, because it was very emotional, and very challenging, and I liked the challenge. Not every episode does your character have one of the main stories, because I was a supporting character. So some episodes I'm just straight-on helping them solve the case and you don't learn much about the character. So I always liked the episodes in which you did, and that was one of them, definitely. Well, and you've done a lot of stage work but the things I remember the most about your character is all the nonverbal acting, the stuff that wouldn't come across as much on stage. It's an interesting dichotomy, I think. It's always about telling a story. Saying your lines on cue, arriving on cue and telling the story. I always feel like that's the same no matter what kind of acting you're doing. Certainly you don't have to project when you're doing film like you do on stage, but even on stage nowadays you're heavily miked so you don't have to work as hard vocally on stage anymore, either. And what are you doing next? Well, just last night, I did a cabaret show in town, which I worked on all year. There's a bunch of music that I'd never done before and it was with a band--it was so much fun. I just did a film called Lady Peacock, which was shot in August. It's a small, independent film and so I don't know what's going to go on with it or when it's going to come out--or if it will even be called Lady Peacock whenever it comes out, since titles change. I'm in New York right now, but I'm going to go back to L.A. for pilot season and try to get another series. That's my next goal.