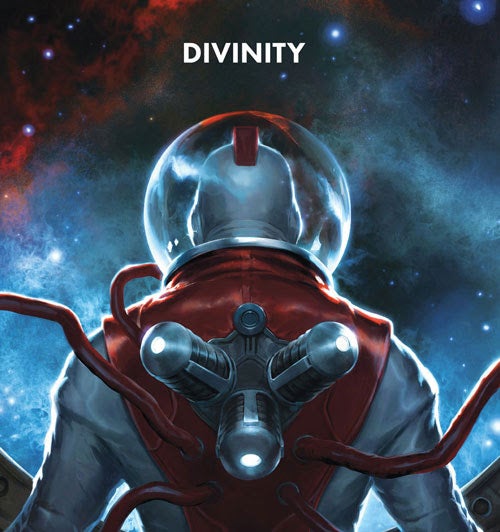 Valiant Entertainment is a publisher that provides its creators plenty of freedom. Looking at the wide range of scope and tone featured within its small, but growing superpowered universe, it's difficult to imagine all of these elements coexisting so well. Yet they blend together wonderfully, and are only continuing to grow. Divinity #1 introduces another new character to Valiant, one that is unlike any other in the current line up.

Writer Matt Kindt and penciler Trevor Hairsine tell the story of Abram Adams, a Russian cosmonaut launched into space on a 30 year mission before the fall of the Berlin Wall. He returns in the modern era of the Valiant universe looking the same, but somehow altered by unknown forces. It's a mysterious premise, one that is in no hurry to explain itself. That's not a fault in Divinity though. Enigmas and mysteries are Kindt's wheelhouse. He weaves complex webs of characters and timelines that reward invested readers with the long game, and fascinate them with each individual issue. It's difficult to ascertain where Kindt may be guiding Adams' story, but Divinity #1 is still a fascinating first chapter.

The issue is narrated by an unseen entity; its speech cold and removed. Observations of individual characters and the fluctuating timeline within the story are commented upon as if by an alien fondly marking notes concerning a favorite experiment. There is a connection, but it is distant. It begs the question of who is observing the story and why it would attract such an odd entity. This narration provides the greatest clue to how Adams' journey has changed him, suggesting a perspective that is beyond human understanding of time and space.

For every detail that Kindt and Hairsine make explicit in Divinity #1, there are at least two left floating ready to be explored as the series progresses. Besides alluding to the pressure of the Cold War when launching Adams into space, they do not make a significant point of his origin as a communist or USSR patriot. His life is presented as a relatively normal one with very human dreams and desires. Adams origin as an unsung hero of a failed state is bound to play into his narrative as the series continues though.

Hairsine weaves the mundane and fantastic together in such a way that readers will be left questioning what is real as Divinity #1 delves into the odder aspects of its plot. He presents images of Adams working through school and struggling with his choice to leave Earth with a very real sense of humanity. When transformations and waking dreams emerge in the second half of the issue though, they are just as lush as earlier sequences are commonplace. His design for Adams suit blends these two aspects together beautifully. It is an iconic outfit with a striking silhouette, yet it also retains the believability of a 1960s space program.

Inker Ryan Winn and colorist David Baron complement Hairsine's pencils very well. Winn captures a shimmering quality within Hairsine's lines, keeping them sharp, thin, and striking. Rather than add unwanted depth, he aims to distill the essence of each composition and draw forth details in the background of larger panels. Baron balances the human and beyond-human focus of the issue by switching between earthy and rainbow-inspired palettes.

Divinity #1 pushes the scope of Valiant ever further, striking into the territory of surrealistic science fiction. It is a beautifully designed introduction and one that plays to all of Kindt's strengths as a writer. While it may be unclear where Abram Adams' journey may lead, it is certain that it will be an experience worth reading.

REVIEW: Divinity #1 is Tripping Into the Unknown