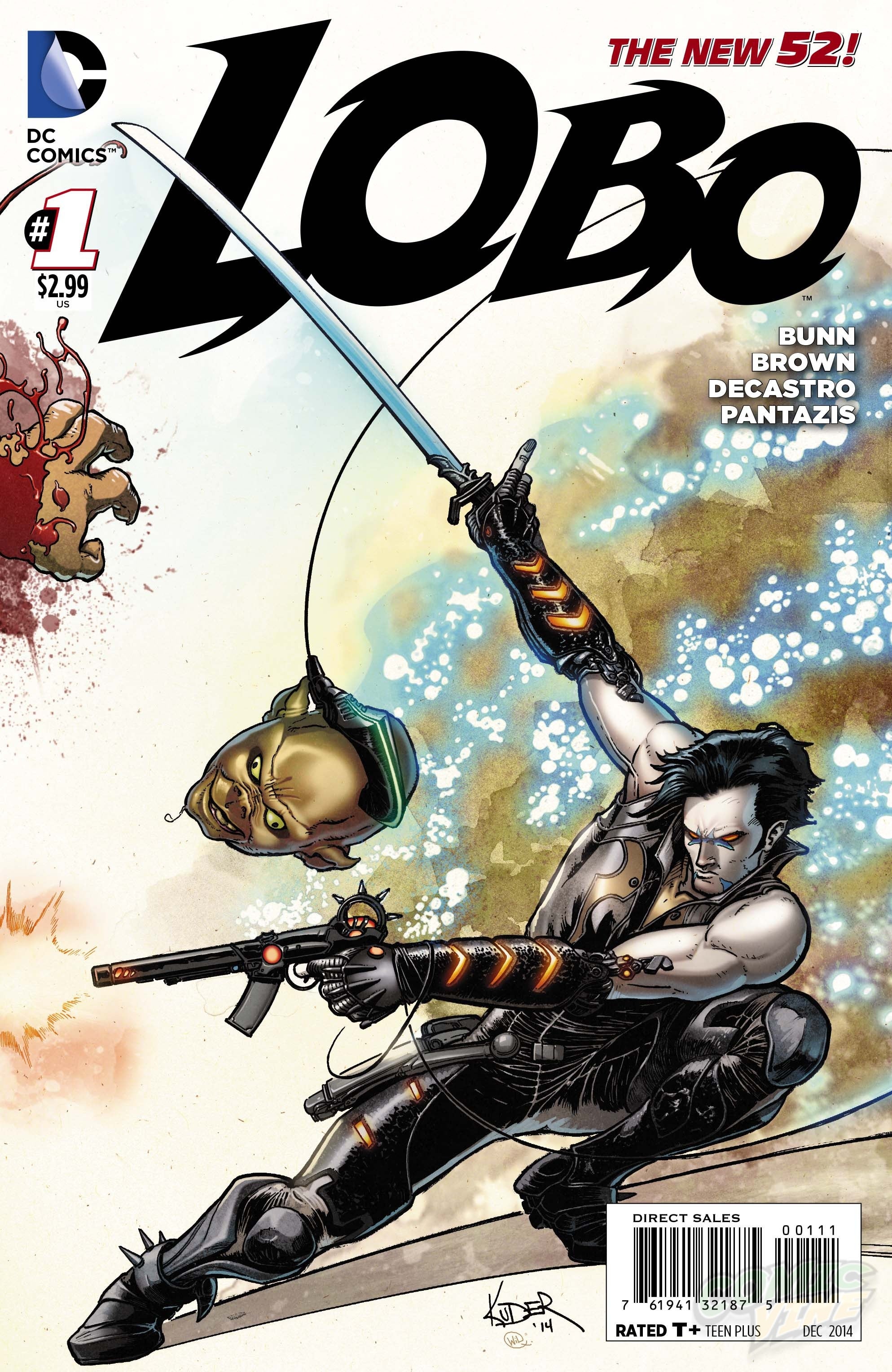 Lobo #1 reads like a summary of criticisms about the style of the New 52 line. It contains copious amounts of death and dismemberment, a surly protagonist haunted by his past, and an overenthusiastic effort to be cool. There are brief moments of interest throughout the issue, but if there was once a heart to this comic, then it was removed before it reached the printing presses.

Most of the problems lie in the presentation of Lobo himself. It's been clear for a long time that the character was being dramatically reinterpreted. There's nothing wrong with that. The original Lobo was a parody of a comics era that is more than two decades in the past now. Reinvention is an important component of a character like this. However, the reinvention that occurs here manages to transform a character that is irrelevant into one that is dull.

Throughout much of the comic, Lobo is a wanton scoundrel reveling in murder and chaos. He kills without thought and is incapable of providing a modicum of respect for anything. Then something that appears to be a twist in his character appears. He is shown to be haunted by his past, so much so that he burns out the section of his brain that makes REM sleep possible. A dream sequence reveals him with a lover in a hackneyed forbidden romance plot. This doesn't read like the cognitive dissonance of a conflicted character though. It reads like two entirely different people who happen to share the same body and name. The elements of Lobo's past and his fear of his dreams seem entirely out of place within the context of the rest of this story.

The inconsistency of Lobo and the story itself does deliver some interesting moments for artist Reilly Brown. The dream slowly transitions from sketchy pencil work to the inked reality that defines the rest of the comic, as Lobo nears his return to reality. The action sequence at the end is well told and provides a couple panels of gore that capture the carefree, violent fun present in the character. There's even what appears to be the visual motif of a Star Wars swipe when Lobo approaches Earth. Most of the issue follows a house style that is comparable to many other comics, but Brown still shows that he has storytelling skills of his own.

These flickers of cleverness are present in the writing as well. There are moments that read as if they might be intended as a joke. Lobo mentions that he is the best there is at what he does, an obvious reference to his origin as a Wolverine knock off. If Cullen Bunn intended for this comic to function as a parody or comedy, then something must have been lost in the process of revision or editing though.

The overall tone of Lobo #1 is one that attempts to be cool, but fails. It attempts to combine a variety of concepts that seem popular as if following a checklist. Conflicted anti-hero, rampant violence, one-liners, and the list goes on. Even the violence feels hollow. The joy present on Lobo's face when hacking down his enemies is not something that he shares with readers. The outcome of all this is a comic that tries to appear cool or edgy when nothing could be further from the truth.

In changing the nature of Lobo, this comic could have become many things. It has instead become an ouroboros. Lobo was once a parody of mainstream comics trends. He is now emblematic of similar trends in modern comics that are in deep need of just such a parody.