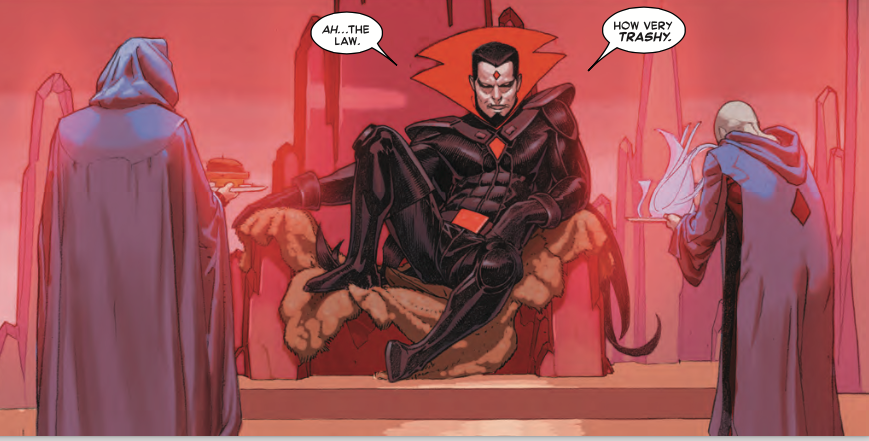 It's a lovely day in Battleworld. With the Marvel Universe successfully destroyed in Secret Wars #1, Jonathan Hickman is finally free to stretch his legs and explore the bizarre new realm that Marvel has touted for months. Secret Wars #2 is a break-neck tour filled with dense panels and an encyclopedia of information. And while Hickman could have easily fallen prey to emphasizing exposition over narrative, he finds an entertaining balance between the two—creating a narrative that’s equallt informative and awe-inspiring.

Many approach the art of “World-Building” as one of science fiction’s toughest tricks. While it’s important to establish a new world’s rules, laws, and traditions, its equally imperative that the actual story doesn’t play second fiddle. As one of the Marvel Universe’s biggest architects since the four-color days of Stan ’n Jack, Hickman has stumbled once or twice over his one building blocks, letting the grander picture diminish the actual characters driving the story. That track record led to a bit of hesitation leading into Secret Wars #2, but thankfully Hickman learned his lessons from Fantastic Four, The Ultimates, and his Avengers/New Avengers saga. While Secret Wars #2 grounds more facts than an Official Handbook To The Marvel Universe, it never feels like a history class snooze-fest.

Instead, concepts are accepted as quickly as they’re introduced. The story trusts the reader to piece together ideas like the Thor Corps., Battleworld’s various hierarchies, and even God himself without much handholding, and that faith pays off. The perfect amount of information is given to service the story and its characters, neither confusing or boring them. Like some of the best genre fiction out there, such as Star Wars, Secret Wars is rich with mythology and instantly-compelling characters. The story hints that there’s centuries of mythology to unpack in each page, but tables those burning questions for another date—or, most likely—one of Secret Wars’ numerous tie-ins. Also, we get one of the best new sci-fi swear-words since “Frak it.”

Speaking of compelling characters, Secret Wars has done a fine job of shaking up Marvel’s Toy Box of heroes and villains. Classic icons like Dr. Strange, Thor, and Mr. Sinister are tweaked enough to feel new and interesting, but still recognizable.  Green Lantern fans in particular should love Hickman’s take on Thor, who’s expanded into Battleworld’s version of the Green Lantern Corp. Dr. Strange gets an interesting new role as well, embracing his former scientific life of order and medicine over magic. And just wait until you see what’s in store for Sue Storm. Her final fate in this new universe, while tragic, makes twisted sense given the main architect behind the story.

But as much fun as Hickman has exploring this new world, he knows that it can’t last forever. Just when Battleworld and its inhabitants start to feel too isolated for their own good, refugees from another universe arrive to remind that there’s still a greater story to be told, and a greater conflict waiting to explode. Their arrival sets the real story in motion, as the vestiges of the old world look primed to challenge the new establishment for reality itself. 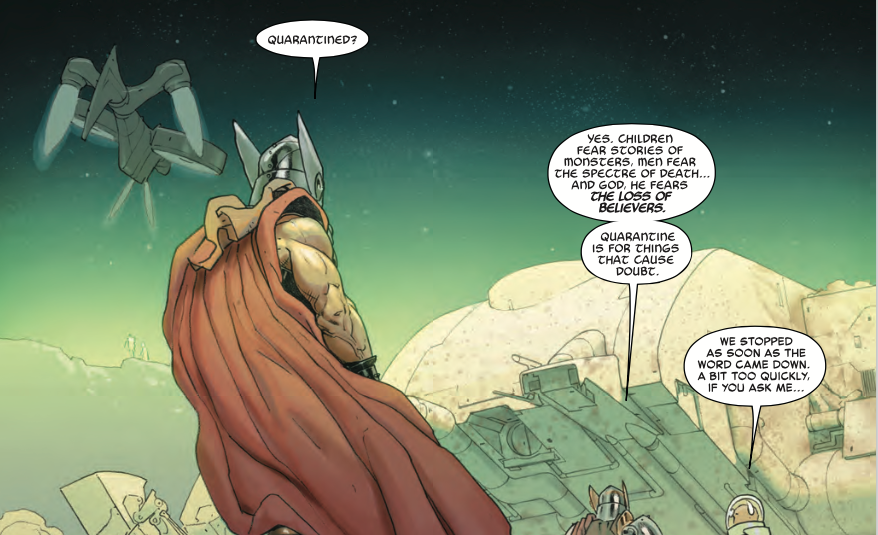 Of course, those stakes wouldn’t feel half as compelling if they weren’t visualized by artist Esad Ribic. Ribic once again proves why he’s one of the industry’s best, squeezing the minutest of details into tiny panels while ripping other pages wide open with dramatic establishing shots and action sequences. It might be fair to call him this era’s new George Perez, as he gives as much respect to detail as he does scope. As readers of Ribic’s Thor work should know, the artist seems to hit his stride in cosmic, larger-than-life stories. When Ribic opens up his star-filled skies, you can almost feel the majesty of space bleeding beyonf of the page. Through Ribic’s gorgeous pencils, Secret Wars reads like a beautiful space-odyssey that television or film could never do justice. And the lush colors from Ive Svorcina coat Ribic’s pencils like a delicious glaze, feeding our eye balls with a treat more delicious than eye candy. This is more like an eye ice-cream cake. Topped with donuts, sprinkles, and sherbet.

With only two issues in the can, Marvel has delivered its best event comic since Civil War. Hickman and Ribic have established an extraordinary amount in just two chapters, but only leave readers wanting more. The stakes feel immense, but never so high that they lose perspective on the characters and story arcs driving them. It makes for a tale that both casual and dedicated Marvel readers can equally enjoy. While the surface is packed with dramatic conflict and intriguing ideas, the details underneath reward fans who have followed Marvel in laying the foundation. And Goddoom it if Esad Ribic doesn’t make every moment sparkle with a gothic charm. Comics don’t get more epic than Secret Wars. With the stage set, the characters established, and conflict ignited—all in glorious fashion—here’s hoping that Hickman, Ribic, and Marvel have even more secret surprises ahead.