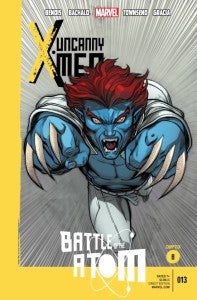 #13 – Chapter 8 of the X-Men's 10-part “Battle of the Atom” crossover – is decent, but not the strongest entry this story has seen. The issue has Cyclops’s crew of X-Men teaming up with the second group of X-Men from the future to storm the gates of the Jean Grey school, now held by the first group of future X-Men. Things quickly go awry, forcing Magik and Colossus to take point via portal while the rest of the X-Men battle it out at the front gate.

The issue is full of little hints about potential future events in the Marvel Universe. There's a mention of Magik, at some point, letting something bad into the physical world and another about something called the “Stark Tower/Baxter Building War.” These may just be made up events thrown in to titillate fans while also giving the future these characters come from the illusion of history. Then again, they may turn out to be actual event storylines somewhere down the line in the next few years, the same way Age of Ultron was teased in an issue of Avengers years before its publication.

Having Colossus and Magik fight back to back, each with Soulsword in hand, seems like an opportunity for breathtaking action visuals, but the scene ends up feeling quite claustrophobic due to its underground setting and Chris Bachalo loading each page up with panels. Bachalo's character designs are as beautiful as ever though, and nobody makes Iceman's powers look as cool as Bachalo does.

Some of Brian Michael Bendis' dialog is a bit grating, particularly when Cyclops is waxing sanctimoniously about all of the “mutant on mutant” violence going on. The whole point of the original X-Men, after all, was to police other “evil” mutants, with force if necessary. I guess near extinction can change a guy's point of view on things, but its hard not to feel that Cyclops sounds like a moralizing blowhard in that moment. The plot doesn't progress more than a few feet, but there is one important new wrinkle introduced with regards to the original X-Men's time displacement problem (which won't be spoiled here).

Its hard to not be a little frustrated with this issue. Its feels like “Battle of the Atom” has yet to fully explain itself (what could cause Jean Grey and company to take such drastic measures? Surely not Dazzler's death alone...), and yet this issue feels like its stalling for time and wasting much of the momentum and tension built up in the previous issue. The ending sets up next issue for some real fireworks, but maybe some answers would be nice as well.

Review: Uncanny X-Men #13 the Pace Down for "Battle of the Atom"