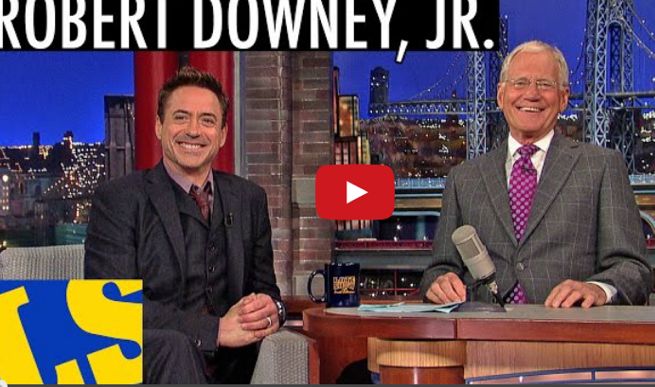 Will Robert Downey Jr. return for Iron Man 4? After Robert Downey Jr.’s numerous appearances today to promote his upcoming film The Judge, the answer is still a little unclear. The answer has gone from if Mel Gibson directs to if Howard Stern directs to "ok, yes" to no. One thing is for certain though, Downey Jr. certainly knows how to drum up publicity for a movie.

Downey also insisted there was no script for Iron Man 4, but he added Marvel did have a plan they were going to announce, even though they are very secretive about it.

When Letterman pressured Downey Jr. again about if he was going to make another one of those Iron Man deals, Downey Jr. said, “Just between us, no. But I’m going to do other stuff with Marvel. I’m still going to be involved with Marvel, and there’s going to be plenty of fun stuff to happen.”

So what to make of Downey Jr.'s responses? Most of his previous answers seemed to be simply agreeing with whatever the interviewer suggested, so maybe the only real answer was the one he gave Letterman. However, the fact that Downey Jr. is teasing more work with Marvel, certainly suggests there's going to be an ongoing relationship. Maybe, his next Iron Man film isn't technically an Iron Man 4, but some type of team-up movie with the Hulk or another character.

Robert Downey Jr. Now Says No To Iron Man 4, But Yes To Other Stuff With Marvel

How The Conjuring: The Devil Made Me Do It Handles Moving Into the 1980s